Black History Month continues in the USA, as does our coverage of Miles Morales’ early adventures!

Scorpion is the second volume of the third series of Ultimate Spider-Man (and the second titled Ultimate Comics Spider-Man) wherein the adventures of Peter Parker are reimagined for a new audience in a more updated setting than the classic sixties comics.

In the aftermath of The Death of Spider-Man, the title is now headlined by Miles Morales.

This particular story continues to establish Miles Morales as Spider-Man in the wake of Peter Parker’s passing and despite the title suggesting classic Spider-Man foe Scorpion is the main adversary of the arc, the story actually focuses on a much more personal battle between Spider-Man and… 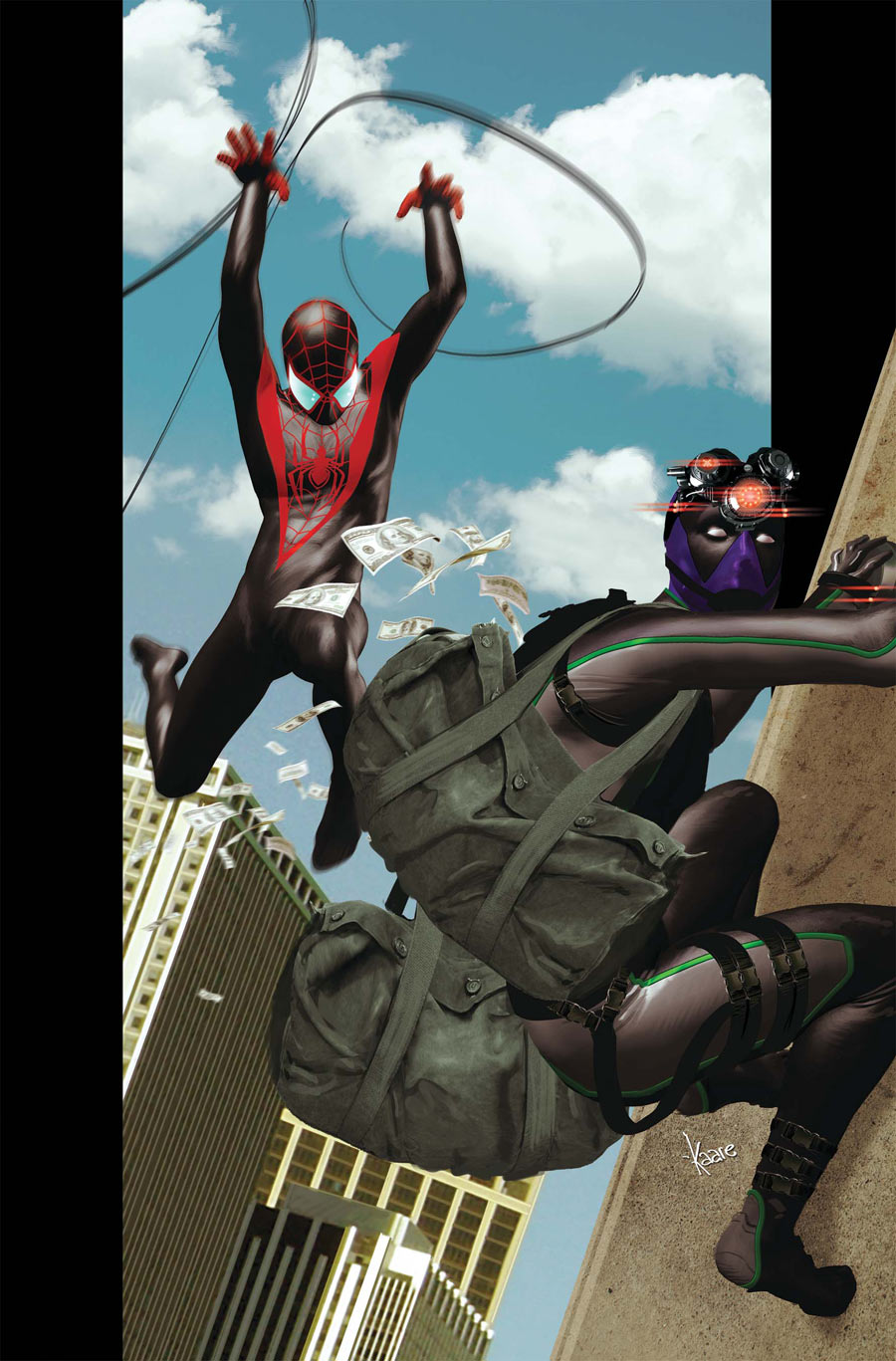 As a young man, Aaron Davies quickly fell into a life of crime alongside his brother and partner, Jefferson. But while Jefferson turned a corner and went legitimate, even working as an informant for S.H.I.E.L.D., Aaron fell deeper and deeper into the underworld, honing his skills to become one of the most successful burglars in the world.
Allying with the Tinkerer, Aaron began donning a costume and technological aids to help him in his crimes, taking on the alias of ‘the Prowler’. Despite this and his estrangement from his brother, Aaron still found time to hang out with his young nephew Miles. On one such occasion, after breaking into OsCorp, Aaron accidentally carried out a genetically altered spider that bit Miles, granting him super-powers in a similar fashion to Peter Parker.
Realising his nephew had become the new Spider-Man, Aaron tried to turn him to his cause. However, when Miles continued to fight for justice, Aaron felt disrespected, and now is one of the young Spider-Man’s deadliest foes – not because of his abilities or technology, but his very close connection to the wall-crawler’s personal life.

Miles Morales is Spider-Man, but he’s still not completely sure of his full potential.

His Uncle Aaron Davies, on the other hand, has figured out Miles’ secret, and has big plans for his super-powered nephew, which include the two of them taking out his competition – namely his new rival in crime, the Scorpion!

Miles’ adventures continue to impress in his second volume, which focuses more on his relationship with his uncle, a part of his story that has become a focal point in pretty much every adaptation of the character.

I don’t generally love the idea of Spider-Man’s enemies coming from a place so close to home (Doctor Octopus being Peter’s mentor in Spider-Man 2, Sandman being Uncle Ben’s killer in Spider-Man 3, Electro being Spider-Man’s biggest fan in Amazing Spider-Man 2 or Vulture being his girlfriend’s father in Homecoming) but sometimes it works (some of those cases also work, to be fair). This is one of those cases, especially because it further twists the idea that Spider-Man’s uncle is such an important figure in his growth. For Peter, his uncle was his inspiration, and for Miles, his uncle is potentially the greatest threat to his existence. Not only is he a physical threat, but he can also hit Miles where it really hurts – by devastating his relationship with his parents.

The story spends a lot of time focusing on the Prowler, and really builds him up as a sinister presence. The different pieces of tech he utilises make for some dynamic battle sequences, and the way his character brings out existential questions in Miles about nature versus nurture make for some good reading.

Despite those thematic pros, I would put a lot of his effectiveness down to the art. 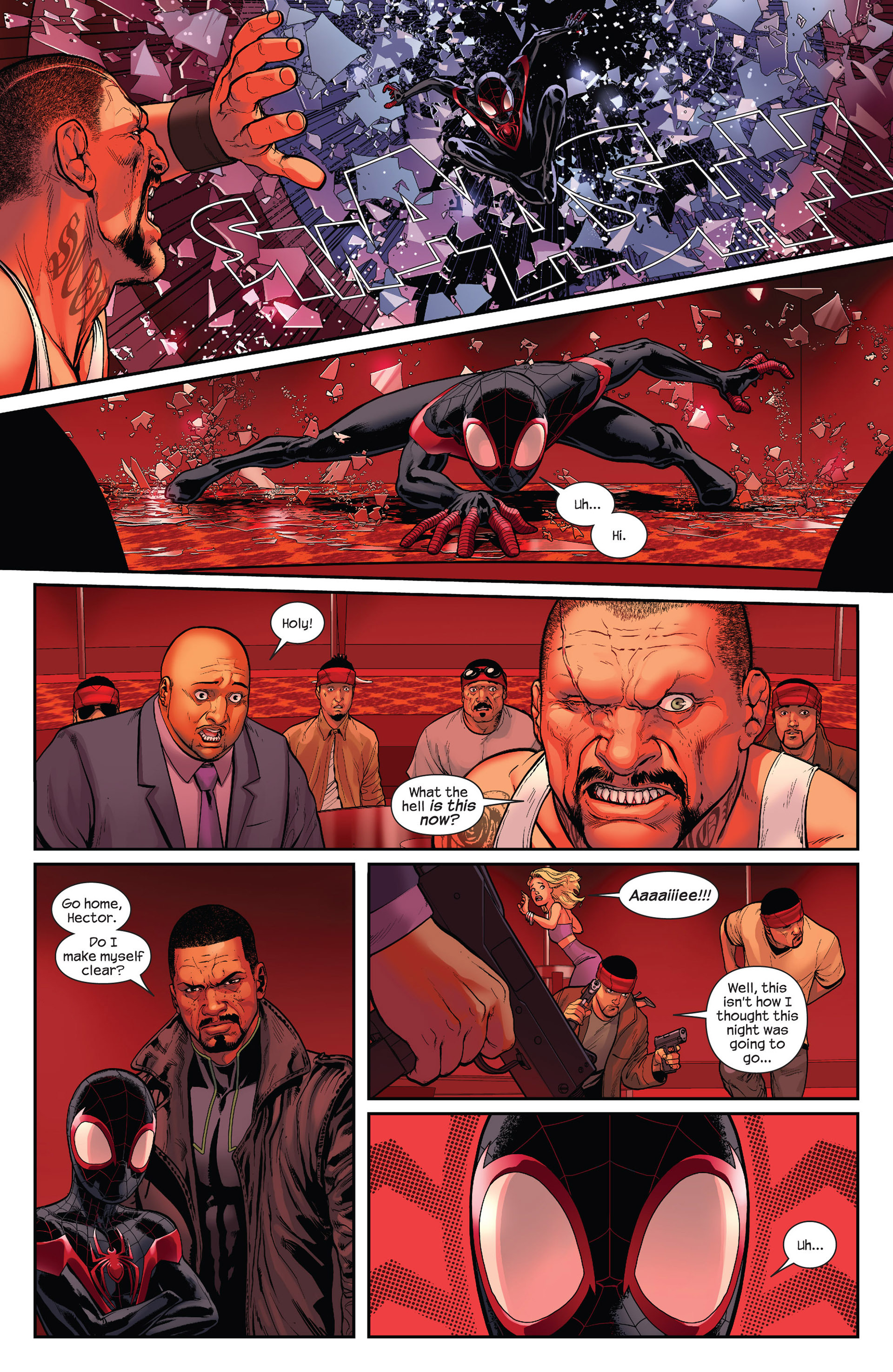 Bendis’ overly wordy dialogue begins to seep back into the book here, and his over-reliance on pretty much every fight Miles has ending with him just zapping the bad guy with his ‘venom blast’ really takes away a lot of the tension, and frankly is just narratively weak. The lack of limitations on his power and his ability to basically take out anyone with a jab is a detriment to his character, I think.

Fortunately, the fight sequences are greatly enhanced by David Marquez’ art, which I think is a real highlight of the book. Everything he draws when Spider-Man is in costume is dynamic and explosive, and his scenes in his civilian life really capture Miles’ youth better I think than most other artists who draw him. You see the character and you can believe he’s just an inexperienced thirteen-year-old, as opposed to the overpowered hero Bendis’ nearly makes him into.

Marquez is also joined on art duties by the returning Sara Pichelli and Daredevil‘s Chris Samnee. Both great artists, although they don’t necessarily have the same impact as Marquez does in this particular book. Overall though, they add some great designs to the story like the new take on Scorpion.

I fear we’re getting close to the point that made me become sceptical of Miles when he first debuted (although it’s been ten years so my opinion may change this go around), but for now, this story is still worth a read.

All-in-all, I give Scorpion a…

Thanks for reading! What do you think? Are villains better with or without a personal connection to the hero? Let me know in the comments below!