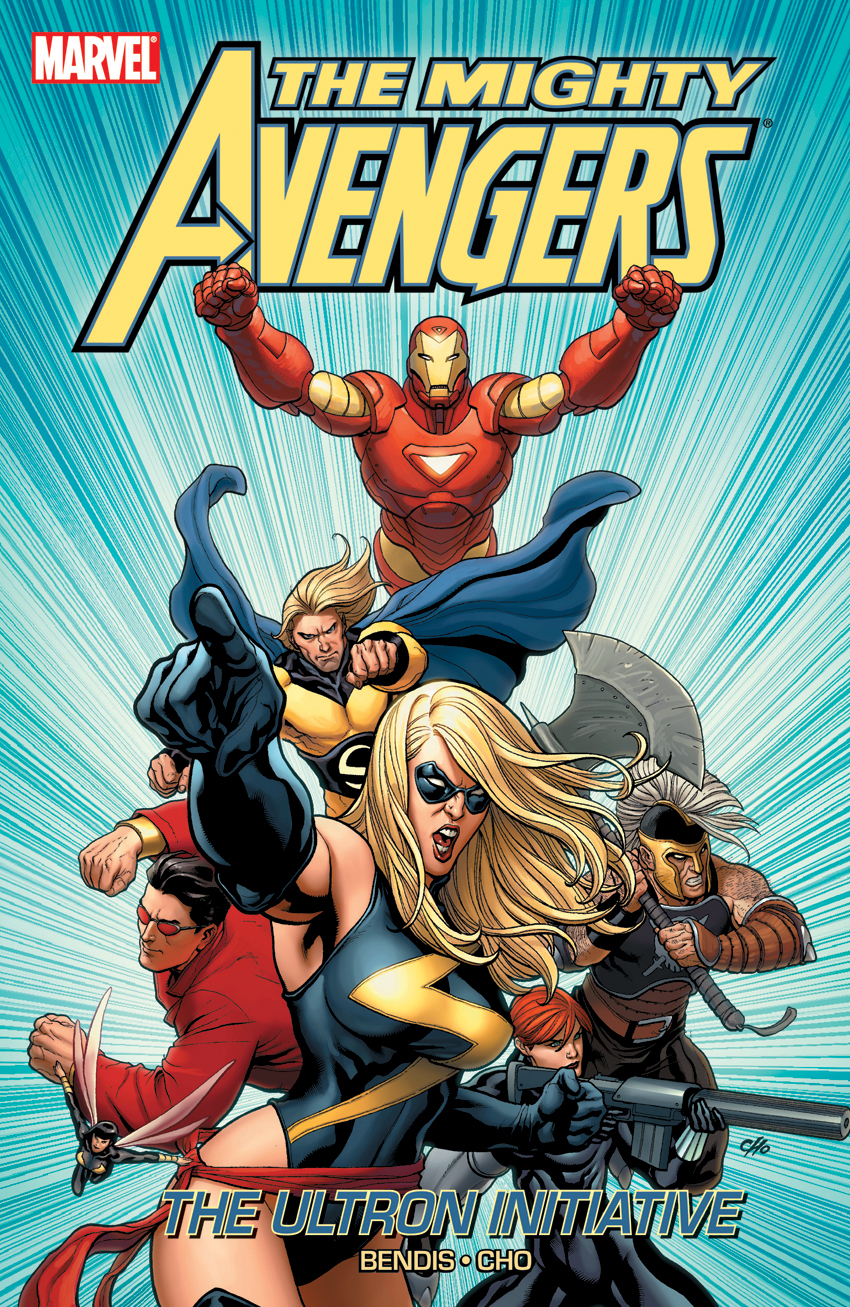 Continuing our look at Avengers jumping on points, we’ve reached the second entry point of the 21st century. After the New Avengers were shattered in Civil War, a new ‘official’ team comes together; one of the most powerful Avengers teams of all time. And it’s only fitting that a team with so much firepower kicks off their tenure by taking on one of the Avengers’ greatest foes: Ultron.

So, after Civil War, the Avengers franchise, and Marvel as a whole, saw quite a bit of a shake-up. 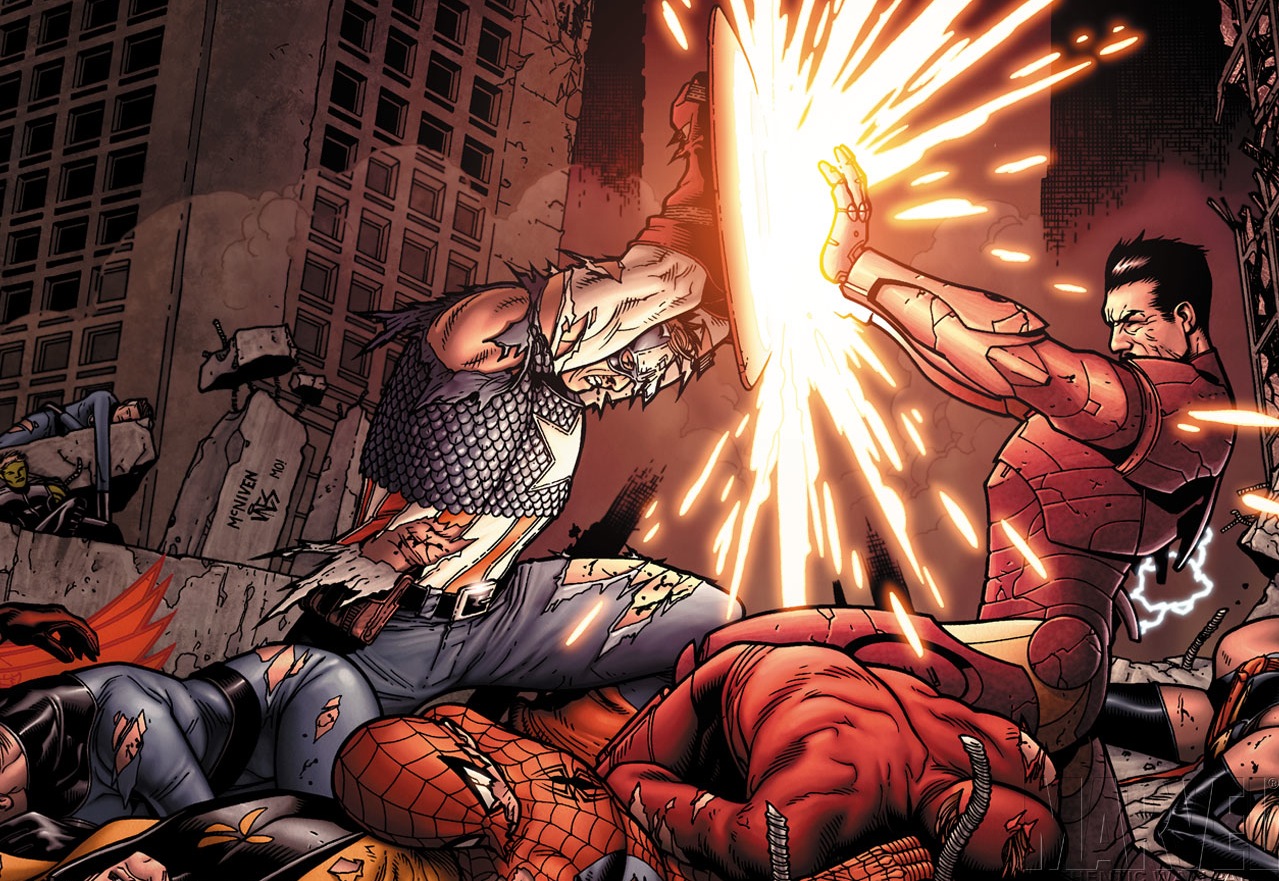 If you haven’t read that book (or seen the movie), then the basics are this. After several devastating events, the U.S. government passes a new law that demands all superheroes register their identities with them. While heroes like Iron Man, Giant-Man and Mister Fantastic are all for this, understanding the need for accountability, other heroes like Captain America, Luke Cage and Hercules are not, as they argue that their ‘profession’ could be stifled by government interference and that masked heroes deserve the right to freedom and privacy.

I’d say in the real world, Iron Man’s side would be right. You can’t really have kids walking around with the power to blow up cities unchecked. But in the context of the Marvel Universe, both comic-book and cinematic, you could easily argue that Captain America had the moral high ground.

Heroes retired, heroes left the country, some even died. And most memorably, Spider-Man revealed his secret identity as Peter Parker to the world as a show of faith in Tony Stark, only for it to backfire immensely when he realised he wanted to swap over to Captain America’s team. 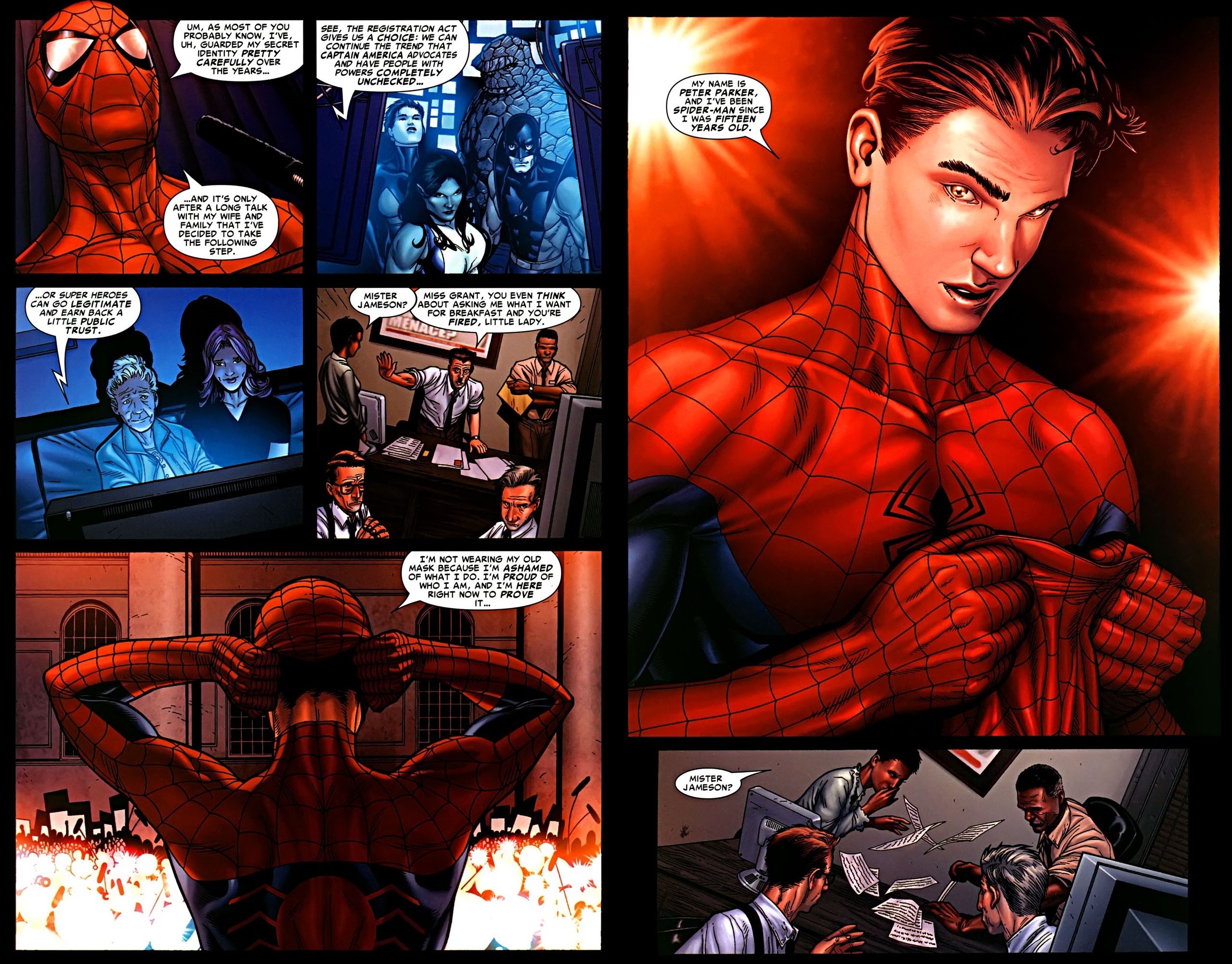 Anyway, regardless of whose side you’re on, the actual conflict was won by Iron Man, due to Captain America surrendering. Having observed that all the heroes were failing to do their duty, and were now just fighting for the sake of fighting, racking up huge amounts of property damage and causing the general populace to fear them, he told all his troops to stand down and turned himself in.

Arrested and put on trial, Captain America was then assassinated on the steps of a courthouse, making the anti-registration heroes’ loss all the more complete.

Luke Cage, Spider-Man, Spider-Woman, Wolverine and Iron Fist dipped out after the conflict died down to continue fighting as a fugitive Avengers team in New Avengers, other heroes tried to make it on their own, and all those in favour of registration were enlisted into the 50-State Initiative.

The Initiative was a US-wide programme that monitored all registered superheroes. Younger heroes were sent to be trained up as proper superheroes, while the empowered adults were divided up into 50 teams, one for each state (although in some cases, there were more than that in certain states; for instance, both the Avengers and the Fantastic Four continued to operate out of New York). 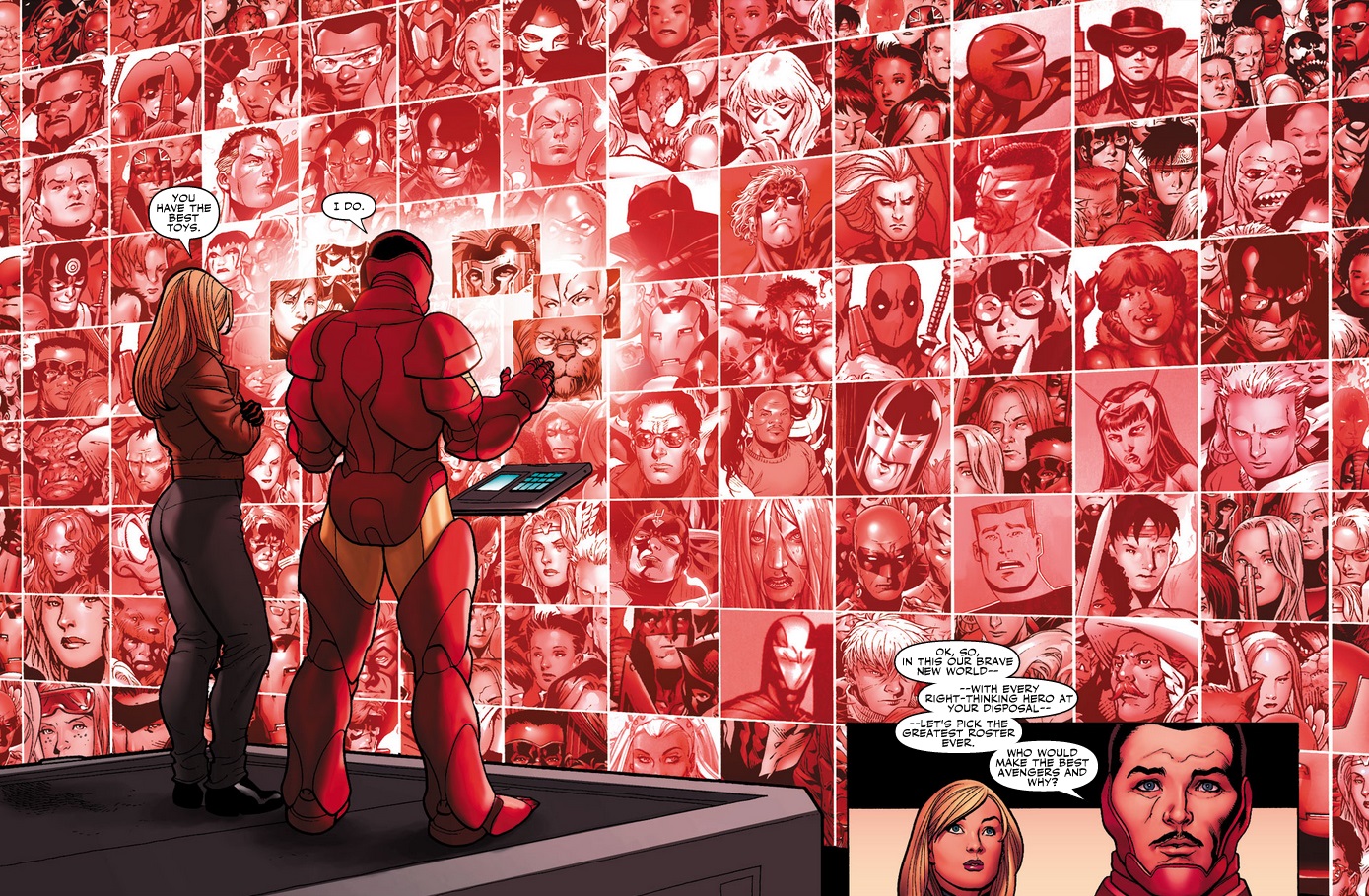 All of this was spearheaded by Iron Man, who was also made the new Director of S.H.I.E.L.D. (Nick Fury had been out of the picture for a little while by this point).

One of his first acts was to create a new team of Avengers, led by Carol Danvers (Captain Marvel, but at the time she was going by Ms Marvel).

After joining the Avengers, Hank Pym, the size-changing scientist superhero formerly known as Ant-Man, began experimenting with artificial intelligence and robotics, and in the process, created a strange unit dubbed Ultron-1.
Ultron quickly became sentient and began to develop an Oedipus complex, learning to hate his creator and becoming fascinated with his ‘mother’ Janet van Dyne. In time, his hatred began to extend to the Avengers and humanity as a whole, and so Ultron began upgrading himself in the hopes that he could one day wipe them out.
Escaping out into the world, Ultron began enacting plan after plan to bring down the Avengers. In the same way he was ‘fathered’ by Pym, Ultron also created his own ‘son’, the android known as the Vision, and a ‘wife’, Jocasta, both of whom eventually turned against him and sided with the Avengers. As he continually upgrades his body after every defeat, Ultron has become one of the most dangerous villains the Avengers have ever faced, having wiped out countries, started intergalactic wars and left his creator with an overwhelming sense of guilt and humiliation.

The Civil War is over, and Iron Man is the winner. As a reward for his services to mankind, Tony Stark is made Director of S.H.I.E.L.D., and one of his first orders of business is to assemble a new Avengers squad.

However, during the group’s debut battle against the diminutive Fantastic Four foe, the Mole Man, Tony Stark’s armour his hacked into, and his unique biology and armour are forced to undergo a bizarre change that morphs the new Director of S.H.I.E.L.D. into an all-new, all-female Ultron.

When you compare this and New Avengers, the fact that Bendis seems to feel more comfortable and more interested in writing the more street-level characters on the New Avengers side of things becomes readily apparent.

Here, he’s doing the opposite of what he’s used to in his usual lower-key titles, forgoing lower level brawls and interpersonal struggles for higher stakes clashes between titans. His Mighty Avengers team is stacked with power-houses, many of whom aren’t as evidently relateable as say, Spider-Man or Luke Cage.

You’ve got Ares, a literal god. Sentry, someone who’s as close to a god as you can get. And on top of that, you have Ms Marvel and Wonder Man, who are also immensely powerful.

Then you’ve got the people lower down on the scale: Iron Man and the Wasp, rich socialites both and Black Widow, a highly deadly Russian spy.

Looking at them in that light, none of them are particularly relateable, which is not to say they can’t be, but Bendis’ attempts to make them so don’t really work.

In an effort to harken back to more classic Avengers comics, Bendis employs otherwise abandoned thought bubbles to convey each character’s thoughts (most modern comics forgo the bubbles in favour of boxes, and generally just follow one character during a story/issue, if any at all). But most of it is just filler and drivel that, while perhaps realistic in some cases, doesn’t really add anything to the comic. A third of it could just be actual speech bubbles that characters could just say, and it wouldn’t hinder the comic at all, and the other two thirds could just be cut out entirely and the comic would probably be better for it.

But while the dialogue varies in quality, the story does somewhat capture that classic superhero feel. There’s less focus on conspiracies and subplots that proliferate the Bendis era of Avengers (although they are still present towards the end) and more just straight up, fun storytelling. The global threat that the Avengers face feels suitably epic, and the when Bendis can get that dialogue right, the way the characters respond to it can make for an enjoyable read.

Meanwhile, on the art side, you’ve got the talented Frank Cho, who, as is probably evident if you’re reading any of his work, is known for his sketches of voluptuous women (also, monkeys, but that’s not as relevant right now). He and Bendis go all-in on that during this storyline, as they take Ultron – one of the most fearsome and inhuman Avengers villains, and transform him into an Angelina Jolie-in-Beowulf-esque naked, metallic woman. Which is… a bit weird, to be honest with you.

I tried to do a bit of research on this yesterday, but I can’t seem to find any clear reason as to why this happens. In-story, it’s explained as being part of Ultron’s Oedipus complex; he was created by Hank Pym, and thus he’s showing his love for Hank’s ex-wife Janet (the Wasp) by transforming into a half-human-half-robot, half-silver-half-skin-tone naked version of her. Like, I get it, I follow it. But I still don’t really know why it happened. From a contextual standpoint, I mean.

I would theorize that Bendis knew that Cho, who is infamous for drawing scantily clad women, would be working on the title, so he decided to play to his strengths. Alternatively, I could see Bendis writing that first, and the editors decided to get Cho because he’s the sort of person who would be all about drawing that sort of thing.

But none of that really, truly, explains the why of it. Why is Ultron a naked woman?

Imagine, if you will, that you can shape-shift, are super-strong, durable and have an array of other powers. You plan to emerge from hiding once more to take over the world. You wouldn’t decide to do that in the form of your naked mum (or dad). Because why would you? It’s weird.

And sure, you could argue that Ultron is a psychopathic robot; basic human logic might not apply to him. But the thing is, Ultron isn’t real. So this is more about that fact that someone, be that Bendis, Cho or a Marvel editor, sat down at some point and thought: “Let’s make Ultron a sexy lady”. I’m honestly struggling to think of why that is, beyond ‘sex appeal’.

But sex appeal or not, it’s still strange.

If you can get past all of that, which if we’re honest, isn’t all that hard – even if you took naked Ultron out of the equation, you’ve still got all the other women (and men) running around in skin-tight, questionable costumes, blowing up buildings or whatever. I’m not saying it makes sense, or that it’s very politically correct, but at this stage, but it’s no secret that comics have leaned pretty heavily on sex appeal. It’s unnecessary, but it’s also undeniable that it’s happened. Still happens of course, but they’re making changes.

Anyway, all that aside, as I said, this comic is fun enough. The actual quality of the art is good, it’s bold and colourful, and although a lot of the women look the same, with costumes and hair colours swapped (which is unfortunate), it does feel like a real superhero epic.

The figures, male and female, are imposing, and the action they’re involved in is dynamic. Seeing Ultron throw down with the Sentry, in particular, makes for a pretty exciting battle.

There’s an interesting mishmash of characters, who, although they don’t quite click as well as the original New Avengers, are still fun to watch, and the whole thing kind of plays out like a dumb action film.

It’s not necessarily A-Grade intellectual writing, but if you want to see some classic ‘Superheroes fight a supervillain and save the world’, then this comic has got you.

Also, if you’re diving into this whole Bendis era, then this and New Avengers do have a fair amount of crossover, so that’s cool too (although if you’re only able to pick up one of the two, I’d go with New Avengers).

Ultron thing is still weird, but all-in-all, I give the comic a…

Thanks for reading! What do you think of ‘sexy Ultron’, yay or nay? Can you imagine her with James Spader’s voice (the guy who plays Ultron in the movie)? Let me know in the comments below!