We’re rounding out this week of Star Wars comics with the first big event of Marvel’s Star Wars line, as the Sith Lord Darth Vader faces off against the entire Rebel Alliance, all by himself. It’s that Rogue One scene x10. Buckle in.

To be honest with you, there’s not a whole ton to say here beyond what’s already been covered in Skywalker Strikes and Vader.

After two volumes each of Marvel’s respective Star Wars series, Star Wars and Darth Vader, the two came together in the line’s first crossover, Vader Down.

Headed up with a one-shot issue to set the stage, the crossover then carried on through alternating issues of Star Wars and Darth Vader, with series writers Jason Aaron and Kieron Gillen, and series artists Mike Deodato Jr. and Salvador Larroca working on their own separate issues.

In terms of story, this would be the second time that the heroes of the Original Trilogy went face-to-face with Darth Vader between the events of A New Hope and The Empire Strikes Back, something that would continue to happen throughout this volume of the Star Wars comic, as well as in the first arc of the second volume that’s being published now.

As the volume continued, some began to bemoan the fact that so many big events supposedly happened between the movies, particularly in regards to Luke and Vader meeting (something that is generally avoided, even if the likes of Leia, Han and Chewbacca meet Vader), as they believed it diminished the confrontations we see in films.

I’m fifty-fifty on that personally, your mileage may vary.

A protocol droid fluent in over 6 million forms of communication and a scrappy astromech, C-3PO and R2-D2 first met on the desolate planet of Tattooine years before the rise of the Empire, when their owners, Padmé Amidala and Anakin Skywalker, first met. The droids were eventually reunited just prior to Skywalker and Amidala’s wedding, and served them both throughout the Clone Wars, often taking part in major battles and diplomatic missions alike. Through sheer happenstance, the two would often find themselves in the midst of the major conflicts that rocked the galaxy, as they were passed from owner to owner, eventually becoming companions of Padmé and Anakin’s children Luke Skywalker and Leia Organa. Despite having vastly different outlooks on how to approach any given situation, 3PO’s overly cautious nature and R2’s boisterous personality mean the pair often complement each other well, allowing them to survive whatever plight they’re faced by, and continue to aid against the fight against oppression. Throughout it all, despite their differences, the pair have remained firm friends, and are often first in line to blunder their way into whatever galaxy-wide threat presents itself.

After receiving a tip that his son, Luke Skywalker, is on the planet Vrogas Vas, the Sith Lord Darth Vader sets out to recover Skywalker and reveal his heritage to him, thus turning him to the dark side. However, upon reaching the planet, Vader encounters a squadron of Rebel X-Wings practising manoeuvres, and after a head-on collision with Skywalker himself, crashlands on the planet. 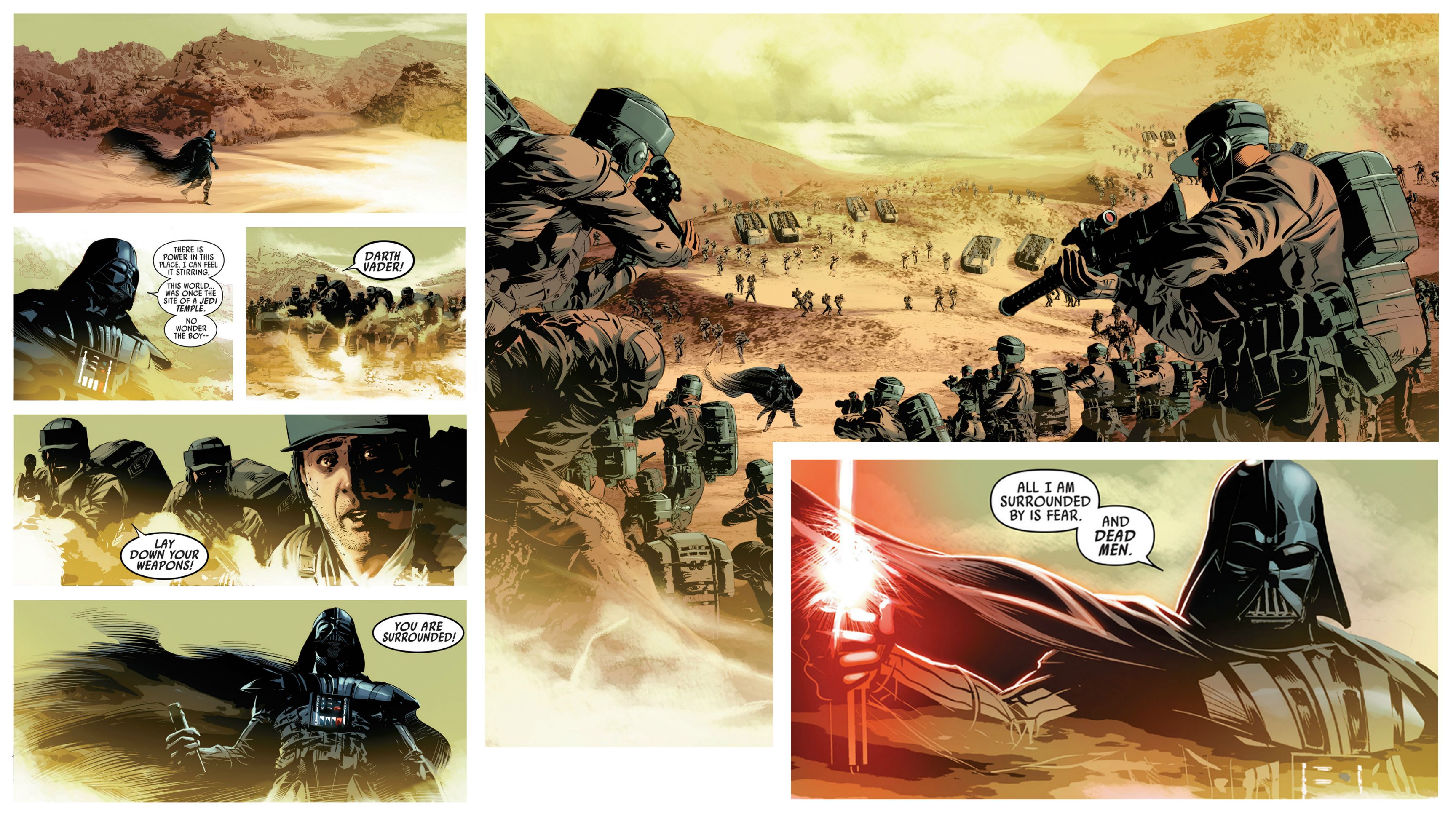 Now trapped and alone on the surface, Darth Vader must face off against thousands of Rebel soldiers, all of whom are desperate to take down one of the most dangerous men in the galaxy. And as Vader wages his one-man war against Princess Leia and the Rebels, his associate Doctor Aphra tries to complete his mission of capturing Skywalker, while Luke’s friends Han Solo, Chewbacca and R2-D2 attempt to rescue their friend before he falls into the clutches of the Empire.

To be honest, it’s probably a bit disingenuous to say that this is the Rogue One scene x10. The beauty of that scene is that it was brief and brutal and really upped the stakes of the movie at the last moment, in spite of the fact that we all knew that the rebels would, in fact, escape with the Death Star plans (spoilers for a 40+-year-old movie, sorry).

But the beginning of this story is in some ways quite like that scene.

It’s Vader unleashed. He’s not conducting a civilised battle with his old master. He’s not holding back so he can toy with his son. He’s cutting loose, tearing people to pieces, displaying the full range of his force abilities, mechanical prowess, and unrelenting hatred for all who oppose him.

The first three(?) or so issues are particularly good at showing this. The various ways Vader manages to overpower his adversaries, despite being so grossly outmatched is thoroughly entertaining. The way his support-system of Aphra and her droids overcome their own problems, equally so. Seeing the heroes of the Original Trilogy face-off against Vader in a way that doesn’t seem unearned or crammed makes for an interesting study on how far the writers will go to have their fun while keeping the continuity intact.

However, eventually, it begins to falter in the same way most Marvel crossovers tend to. By which I mean it loses focus and begins to draw more from outside material than the story it’s currently telling.

Of course, I’m not dismissing the quality of stories that build off of what has come before. Secret Wars, for instance, while not perfect, works very well as the culmination of writer Jonathan Hickman’s years of work on the Avengers titles. And while it does occasionally expect you to have read the tie-ins, which is a little annoying, the story its telling is for the most part contained.

However, what starts off as a contained story: Vader trapped on a planet full of Rebels, starts to waver as things beginning tying up, and the Vader issues in particular start to become more concerned with progressing the story they were already telling, as opposed to finishing off the story currently going on. To be more specific, without spoiling anything, the narrative becomes heavily reliant on you knowing what’s been happening in the Vader comic leading up to this point, which is fine, if you’ve read all the Star Wars comics prior, but if you’ve just been following the main Star Wars title, you may find yourself a bit perplexed as to who the various characters showing up are.

As a piece of the overall Star Wars line, this is a decent read, with a very strong front half that encapsulates everything that’s great about Star Wars comics. But the back-half isn’t very new-reader friendly and ends up being, in essence, just another few issues of the Darth Vader comic. In some ways, it could have been more beneficial if this was a separate limited series, as the Star Wars half of the story doesn’t try to dominate the narrative as much as its sister series Darth Vader, making it clear that Gillen is more concerned with telling his own story than he is helping script an event.

Not that I blame him. You sign on to write a story, you no doubt want to tell your story and not be hooked into writing a tie-in to an event every few months. It’s a fairly common complaint among Marvel fans in recent years, and it’s a shame that that so quickly extended into the Star Wars line.

Still, despite my reservations (which I may have overstated a tad), it’s still a good story and has some interesting developments for the ongoing series as a whole, and as such, I’m going to give it a…

Thanks for reading! What’s the limit of zaniness you’re willing to accept in the Star Wars universe? And what’s your favourite ‘out-there’ concept? Let me know in the comments below!

One thought on “STAR WARS: VADER DOWN | ‘New to Comics’ Breakdown”