More Image comics from the Humble Bundle sale. It’s ending at 7pm (BST) today so grab it while you can. Today’s comic is the acclaimed superhero outing from the creator of The Walking Dead (I should cover that soon), Invincible. 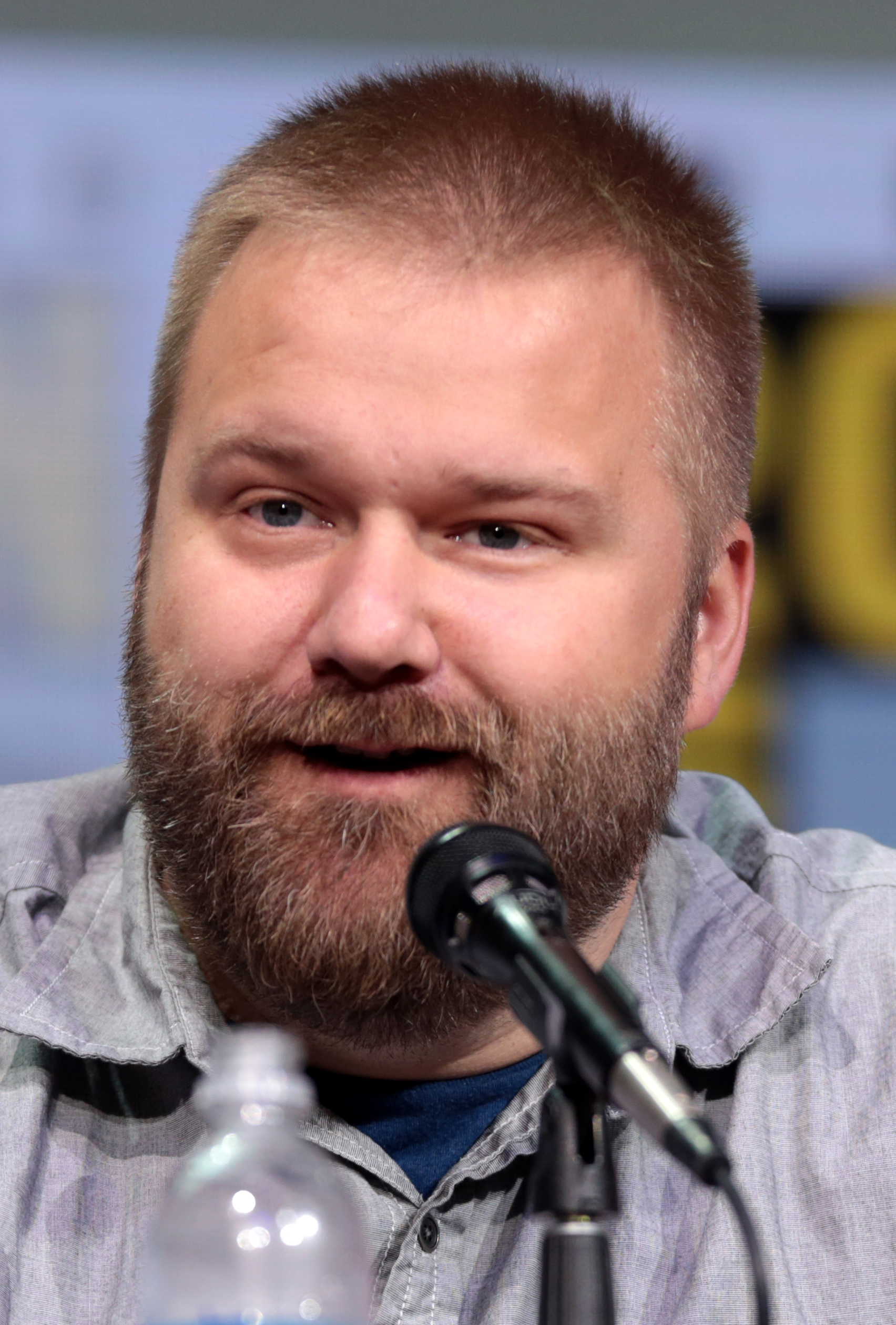 Invincible was a superhero comic book written by The Walking Dead‘s Robert Kirman. Despite being colourful and vibrant, it’s known for the fact that it, at times, quickly slips into extreme graphic violence. Decapitations, bisections, blood, guts, the whole deal. What seems like a pleasant, simple bit of superhero storytelling can quickly go from 0 to 100 in the blink of an eye.

The series was successful enough to run for 144 issues, before finally coming to an end in 2018 (similarly, Kirkman’s other big hit, The Walking Dead would also come to an end soon after).

Unlike other superheroes like Superman, Batman and Spider-Man, Invincible is wholly owned by its creators. Being published by Image Comics allows creators more freedom to tell the story they want to tell and do with characters whatever they want.

This is due to Image’s founding by a number of creators who had grown tired of the work-for-hire practices at other comic book companies who they felt didn’t reward their talent properly *cough*Marvel*cough*. After meetings with the ‘Big Two’ (Marvel and their competitor DC) in the early nineties, these creators, Todd McFarlane (renowned Spider-Man artist), Jim Lee (current DC CCO), Rob Liefeld (Deadpool co-creator), Marc Silvestri (current Top Cow Productions CEO), along with artists Erik Larsen, Jim Valentino and Whilce Portatio, announced the founding of Image Comics.

They would publish their new material through Malibu Comics (until they became secure enough to do their own thing), each under the Image banner, from their own self-owned studios. The rules were simple: Each creator would retain ownership of their work, and none of the Image partners would interfere with other partners work.

Since then, Image has become the third-largest producer of comics and graphic novels after the aforementioned ‘Big Two’. While, like their former employers, these creators originally published predominantly superhero fiction, they have since diversified substantially, working with a massive range of creators to create science-fiction, horror, fantasy, drama and everything in between.

Invincible though, is obviously still firmly planted within the superhero subgenre.

Mark Grayson was a normal teenaged boy, with one big difference – his father, Nolan Grayson, was the world’s greatest superhero: Omni-Man, defender of democracy. Hailing from the planet Viltrum, Nolan was once a member of a great warrior race who had achieved the perfect society on their home planet. Spreading out across the stars, his people began spreading their doctrine to different worlds, hoping to elevate them. With their numbers spread thin, Nolan took it upon himself to watch over Earth, and in time became its hero, fell in love and had a child. Years later, as his son Mark neared the end of high school, he finally began to develop powers of his own, donning his own costume and taking on the name Invincible. As one of the most powerful superheroes on the planet, Mark now does his best to balance his studies and saving the world, all the while dealing with his father’s legacy.

We kind of just covered this in the character spotlight what with this comic being his origin story, but whatever, here we go:

Mark Grayson is the son of the world’s greatest superhero Omni-Man, and since learning his father’s secret at the age of six, has been waiting for his powers to kick in. As he nears his eighteenth birthday, Mark’s wish finally comes true, and shortly after he takes to the skies as the world’s newest costumed hero Invincible.

As Mark works to carve up his place on the superhero scene alongside heroes like the Guardians of the Globe and the Teen Team, he begins to realise that not everything his father told him about their origins is completely true.

I actually read this comic in three parts. Namely, the three volumes it’s released as. However, the reason I decided to look at it as the omnibus that collects them instead is that the way they divide up these issues is kind of peculiar. 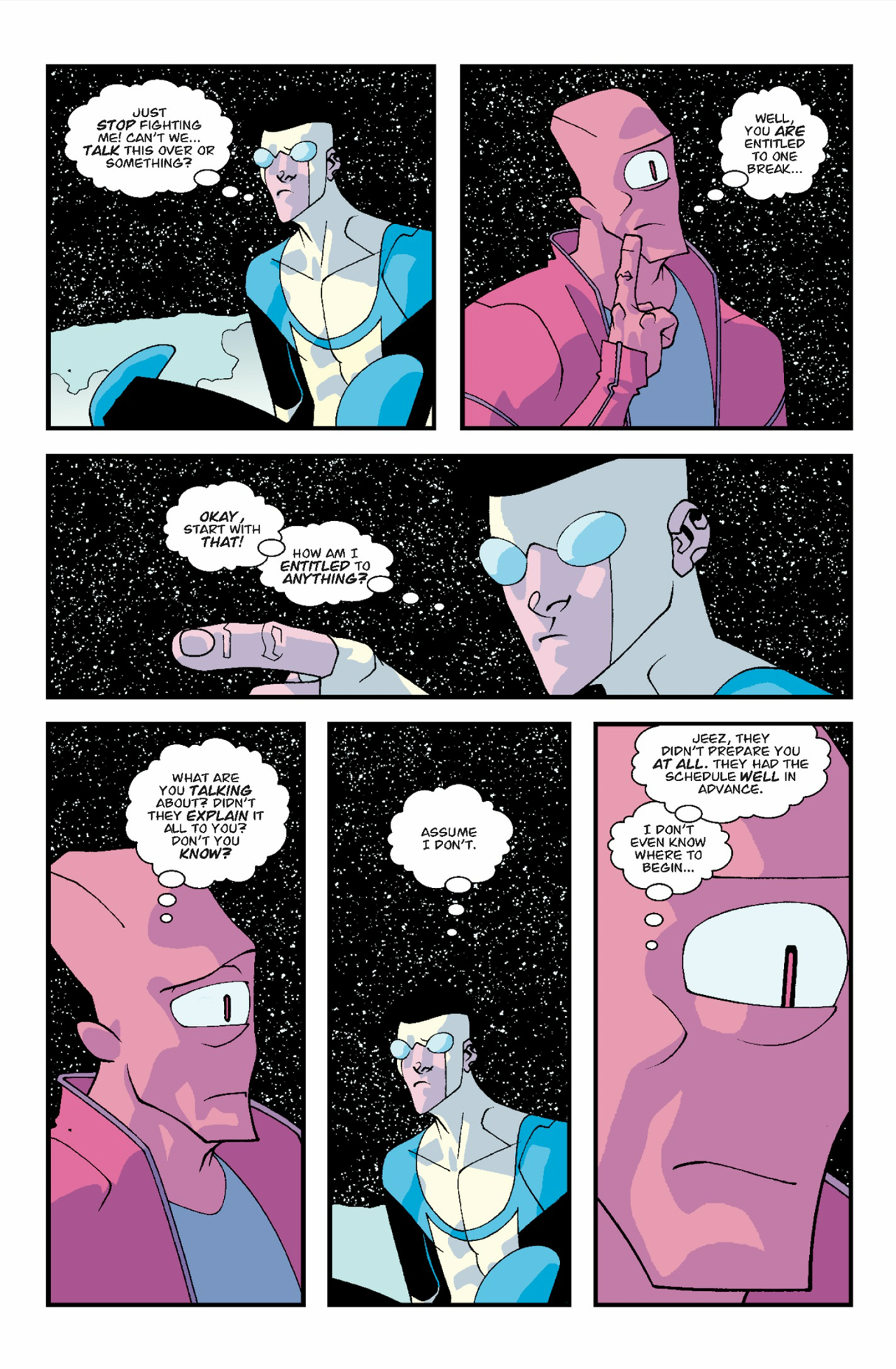 As a whole, Invincible #1-13 makes up a good story. However, if we look at the volumes individually, things look a little different.

The first volume, Family Matters, is your standard superhero comic. The characters are new and fresh, of course, but the story is one you’ve heard a thousand times. Boy gets superpowers, puts on a costume and fights crime. Tries to balance his civilian responsibilities with his heroic ones. Sure, you could point to Invincible’s specific origin and the world writer Robert Kirkman and artist Cory Walker have created as an interesting one, but in a vacuum, those first four issues are nothing special. So if you’ve been told Invincible is a great series, then thrown down a tenner on the first volume, you might be wondering why everyone’s so mad about it.

The second volume, Eight is Enough, is much the same. There are things to enjoy, of course, but the majority is still not too far removed from the norm. The art remains consistent; simple, but emotive and bright, a nice callback to superhero comics before they got all grim and gritty in the eighties and nineties.

There is an artist change in the final issue that continues throughout the majority of Invincible going forward, but the art styles of Cory Walker and Ryan Ottley are somewhat similar and Ottley’s style is a bit more detailed anyway, so it’s not a game-breaker. While the dialogue isn’t always the best, the story itself is fun, and exploring the various ins and outs of Invincible universe is interesting enough. There is a rather tantalising tease for what’s coming up, but it doesn’t properly get expanded on until the later volume.

It’s that third volume, Perfect Strangers, where Invincible really finds itself. I don’t doubt that that’s intentional – the first eight issues present you with something familiar, so the third arc can shake things up dramatically. A major twist comes in that sets the tone for the series going forward; delivering some fascinating drama, deepening that already interesting lore even further, raising the stakes immensely and delivering some great action pieces.

Perfect Strangers is the comic really firing on all cylinders and is the point where the series really grabs your attention. It’s the story where it takes Invincible from a perfectly fine superhero comic to a must-read.

What seemed to be an inoffensive series with the odd joke that doesn’t always land and colourful art is transformed into a violent, blood-soaked slug-fest that really makes you wonder what’s going to happen next. Everything you knew about this comic is thrown on its head, and the possibilities truly start to seem endless.

So, contrary to yesterday’s verdict on Hack/Slash, this time I would recommend going for the omnibus (or Ultimate Collection, as it’s called here) rather than the individual volumes because unless you buy a batch of volumes, there’s a chance it may not hold your attention long enough to get you to what makes this comic special.

Thanks for reading! Have you read Invincible, and if so, what did you think? What’s your favourite type of superhero story, fun and hopeful or dark and gritty? Let me know in the comments below!