Today we’re turning away from DC thanks to Humble Bundle‘s ongoing charity Image Comics sale (ends on the 22nd July), where you can snag loads of comics for as little as £1. Kicking things off is the first omnibus of the action-horror comic Hack / Slash. 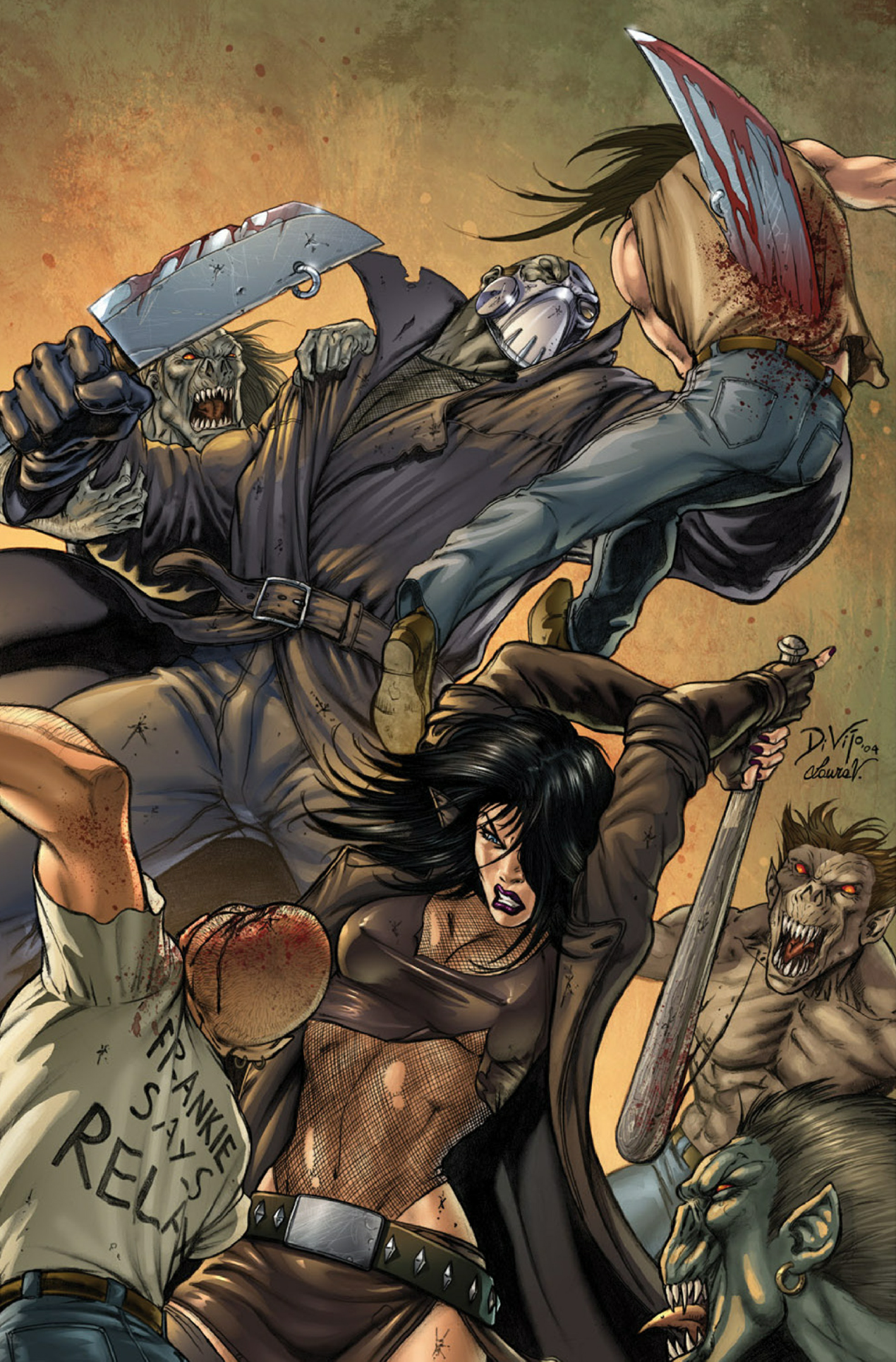 Although a part of the Image Comics sale, the comics published in this omnibus actually preceded Hack/Slash‘s transfer over to Image and were published individually at the now-defunct Devil’s Due Publications, and as such features the occasional crossover with other Devil’s Due characters like Evil Ernie.

Devil’s Due started in the late nineties, originally both an art studio and a small-time comics publisher, but after focusing on its comic book output, it rose to become one of the ten most prominent publishers in the United States. Over the years, they have published books from a wide variety of subjects, from Voltron to Family Guy to original creations like Hack/Slash.

However, after some financial troubles in the mid-to-late 2000s and a company restructure, Hack/Slash creator Tim Seeley took his book to a competitor, Image Comics.

On top of crossovers with other Devil’s Due characters, Hack/Slash has also had crossovers with more high profile characters. Alongside bigger comic book stars like Vampirella, the series’ main characters Cassie Hack and Vlad have also crossed paths with horror movie icons such as Ash Williams from Evil Dead and Chucky from the Child’s Play franchise. The latter of which rounds out this first omnibus.

This era of Hack/Slash was predominantly made up of one-shots until it got a miniseries, and later, an actual ongoing (although that’s collected in later omnibuses). Specifically, this omnibus collected the first two volumes worth of one-shots and miniseries, First Cut and Death by Sequel as well as the aforementioned Chucky crossover, Hack/Slash vs Chucky.

Something of an outcast, Cassie Hack was bullied at school, until her mother, Mrs. Hack the lunch lady, stepped in and began murdering those who made fun of her daughter. After her mother killed herself to avoid being arrested, Cassie was taken into foster care and moved to another school. However, due to her connection to the infamous ‘Lunch Lady’, Cassie became the subject of bullying once more, causing her mother to return from the grave as a ‘slasher’ – killing those who tormented her daughter until Cassie was forced to step up and put her mother down once more. With no connection to anything or anyone, Cassie sought to atone for her feelings of guilt by fleeing her new home and travelling across the country hunting down and killing slashers. One such case led her to encounter the monstrous-looking Vlad, who soon became her best friend and companion on her quest to rid the world of these monsters.

Cassie Hack and her brutish deformed friend Vlad hunt ‘slashers’, monsters either alive or undead who prey on the innocent like something out of a horror movie. In a series of misadventures, the pair encounter zombified veterinarians, murderous Christians, spoiled dream-stalking children, overzealous comic fans and other weird and wicked threats.

But the danger really ramps up when one of their old foes forces them into a confrontation with a horror icon – Chucky.

While I really do love some films like Evil Dead, The Thing, The Exorcist and It Follows, I’m pretty indifferent to quite a lot of stuff. And as such I don’t really rate Friday the 13th, (although Jason Takes Manhattan is pretty enjoyable for very different reasons) or Texas Chainsaw Massacre.

As for this comic in particular, I’m quite mixed.

For the first few issues, I was really into it. It wasn’t blowing me away, but it presented an interesting enough premise, the art was strong, the writing simple but consistent. Like watching an enjoyable horror film. Which, I imagine, was the intent. It had fun with horror movie tropes and liked to play up the violence and promiscuity. It was amusing at times, and awesome at others.

I really dug the designs of the various antagonists, especially in Girls Gone Dead and Comic Book Carnage, both of which were illustrated by Federica Manfredi, who stands alongside Euthanised illustrator Stefano Caselli as probably the best display of artistic talent in this book.

Basically, the comics that would, outside of the ‘Omnibus’, be collected as Volume One: First Cut, really got me invested in Hack/Slash.

And then, as we moved into what would be Volume Two: Death by Sequel, things once again felt reminiscent of watching horror movies – unfortunately, this time it was the ones that have had more sequels than they deserved.

You know what I’m talking about. It’s most evident in the big horror franchises (it’s fine to love them all, just FYI) When it starts off, it’s interesting, coherent, it gets things done.

Then there’s… all the rest of them… forgettable, convoluted, inconsistent, not as well made. You may find a few gems among the later entries, but for the most part things have started to go off the rails.

That’s how Volume 2: Death by Sequel feels. The art, in some issues, really takes a dive. The writing feels like someone else has taken over and partially forgotten what they did in the first few issues. Everything just feels less… inspired.

It does start to bring things back in Hack/Slash vs Chucky, which feels more beholden to the original few books and brings back some of the stronger art, but by that point, you’ve already taken in a fair amount of so-so content.

Basically, I can’t recommend this whole Omnibus. I think half of it’s really fun, and then it kind of just seems to lose what made it special. Luckily, you can just buy those aforementioned smaller, cheaper volumes. So so far, I’d say read volume one. Skip volume two. And although at this stage I’ve only seen half of volume three, it appears to be on the right track, so yeah, go with that.

But since we’re looking at the omnibus as a whole right now, and it did get me invested enough to want to read more, despite the significant lull in quality in the middle, I give it a…

Thanks for reading! What’s your taste in horror like? Does anyone else agree that Texas Chainsaw Massacre‘s overrated? Let me know in the comments below!