This time, we’re looking at the first appearance of the Suicide Squad as we know them! Not only that, but it’s the start of DC’s ‘Post-Crisis’ universe – the reestablishing story-line picking up where Crisis on Infinite Earths left off and setting the stage for another twenty-six years of adventures.

In 1986, DC published their Crisis on Infinite Earths storyline. It was a way to rejig their universe and make it less convoluted.

They didn’t overhaul everything – as this comic shows right out the gate, the Justice League has still been around for long enough that they’ve cycled through various members, and at the start of the book, there’s already a formidable roster of heroes such as Superman, Captain Marvel, Batman, the second Robin Jason Todd, the second Green Lantern Corpsman Guy Gardner, the third Flash Wally West, Beast Boy (previously known as Changeling) and the Teen Titans, the second Blue Beetle Ted Kord, Doctor Fate, Black Canary, Martian Manhunter and the Justice League.

Prior to the Crisis,  Shazam didn’t appear in the mainstream continuity, having previously been purchased from another company, Fawcett Comics, and then given his own universe – Earth-S. In Legends, however, the new reality of DC Comics meant that he had been operating in the main universe for a short period of time.

Basically, this universe carried on from the previous one, but with the understanding that stories were now open to new origins and twists that hadn’t been present before. As evidenced by Shazam’s appearance, the multiverse was now gone, and so heroes like Shazam and the Justice Society shared a universe with the heroes of the Justice League.

Wonder Woman was the most obvious example of DC’s changes, as her history had been completely rebooted, and as of Legends, had only recently arrived in ‘Mans World’. This obviously meant she was no longer a founding member of the Justice League (in the same way Martian Manhunter would be replaced as a founder by Cyborg in the post-Flashpoint reality). I should really write a separate post about all this DC multiverse mumbo-jumbo.

What this comic is perhaps most known for, however, is the fact that it rebrands the Suicide Squad. Originally, they were just a group of regular humans. Rick Flag Jr., his girlfriend and two scientists. This Squad’s stories were more focused on things like adventuring and fighting monsters.

However, during Legends, the character of Amanda Waller was introduced. Alongside Rick Flag Jr., once again the field leader of the Suicide Squad, she helped form a new Squad – this time comprising of supervillains, who would undergo top-secret missions for the U.S. Government in exchange for a pardon.

From out of Belle Reve Penitentiary, ruthless government agent Amanda Waller calls the shots of Task Force X – a top-secret black-ops team composed of super-villains. Implanted with bombs to ensure their obedience, and the warning that they will be disavowed if a mission goes wrong, the team complete missions in the interest of the U.S. government to reduce their prison sentences. Due to the high mortality rate of their missions, Task Force X has earned the nickname ‘the Suicide Squad’, with their members having a high turnover. However, alongside their sometimes field leader, Colonel Rick Flag, villains such as Harley Quinn, Deadshot and Captain Boomerang have shown themselves to be capable and efficient enough to make themselves longstanding members and take small steps towards ending their sentences and ensuring their freedom.

On the planet Apokolips, Darkseid and the Phantom Stranger debate the nature of legends, order and chaos. Hoping to prove himself the supreme power in the universe, Darkseid hatches yet another plan to overtake the Earth – a planet that has previously evaded his grasp. He dispatches his general, Glorious Godfrey, so that Godfrey can instil unrests among the human population, in the hopes of turning them against their heroes and protectors, diminishing their legacy so that Darkseid can take the planet and prove to the Stranger that his legend is the only one that will be remembered in future.

In some ways, Legends reminds me a lot of Crisis on Infinite Earths. 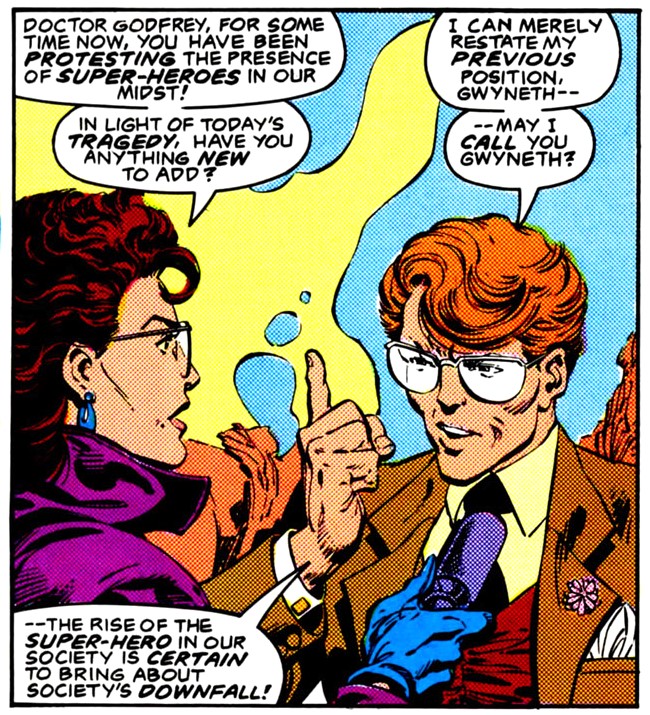 Not in plot, of course. One follows the multiverse being destroyed, and the last surviving heroes struggling to save what they can from a godlike being. The other also features a godlike being, but instead of destroying universes, this one’s just being more of an annoyance by trying to convince the people of the United States that super-heroes are up to no good.

Each issue, especially in the parts focusing on Shazam, the narrator and Billy’s own monologue hammer down what he got up to in the first issue. On one hand, yes, it shows us just how shaken he is by what’s going on, but on the other… jeez, we get it?

I understand that comics are conventionally released a month apart, and so people may sometimes need a reminder, but every issue? Come on.

This is especially tiresome because as the story progresses, it becomes more evident that not only will Shazam be absolved of his supposed crime, but any and all consequences will be swept away.

To compare it to something more modern; the public perception of superheroes is also something that weighs strongly on the main characters in Civil War. While some may debate the quality of that story, it had a lasting impact. The event wasn’t tidily resolved; the ramifications of what the characters had done in that story were felt for years – the superhuman registration act itself wasn’t repealed for about three years, meaning heroes like Spider-Man and Luke Cage always had the fact that their superhuman activities were illegal hanging over them, and the rift between characters like Iron Man and Captain America wasn’t really mended until the start of the current Avengers volume – eleven years later.

Here, a lot of the problems are resolved with relative ease. Shazam’s redemption comes in the form of a simple epiphany, and the other heroes, bar one or two minor incidents, face very little in the way of adversity. This is especially shocking considering the antagonists in this story, Darkseid and his ilk, are Gods. And yet, instead, the climactic battle is against regular people piloting weird robot dogs that each hero can take down with relative ease. What’s that about?

Perhaps the only thing of actual note in this comic is the side story concerning the first part of Darkseid’s plan – dispatching a creature called Brimstone to Earth (something actually empowered enough to serve as a true obstacle the heroes must come together to overcome), which in turn results in the formation of the Suicide Squad. Their coming together is interesting enough, and the adventures of Captain Boomerang that continue throughout the story are entertaining. Unfortunately, true to the rest of the story, the Suicide Squad’s actual battle against Brimstone is brief and dull.

Overall, this comic is an easy miss. It’s crammed with unnecessary exposition, and what happens – bar the aforementioned Suicide Squad formation – are all of little to no consequence.

If there are any saving graces, apart from Boomerang’s enjoyable interactions with the wider DC universe, it’s seeing Darkseid and his New Gods depicted in classic DC house style. There’s something about seeing the Lord of Apokolips drawn in this dated manner that really makes him look more unnerving and monstrous than the way more contemporary artists draw him.

But if that’s what you’re into, then there’s a picture right there.

At its heart, Legends has the potential to be a great DC story. In spirit, it’s timeless. In execution, not so much. Ultimately, it doesn’t quite hold up, and a result, even the best bits of the comic (the Suicide Squad) have become a bit dated. 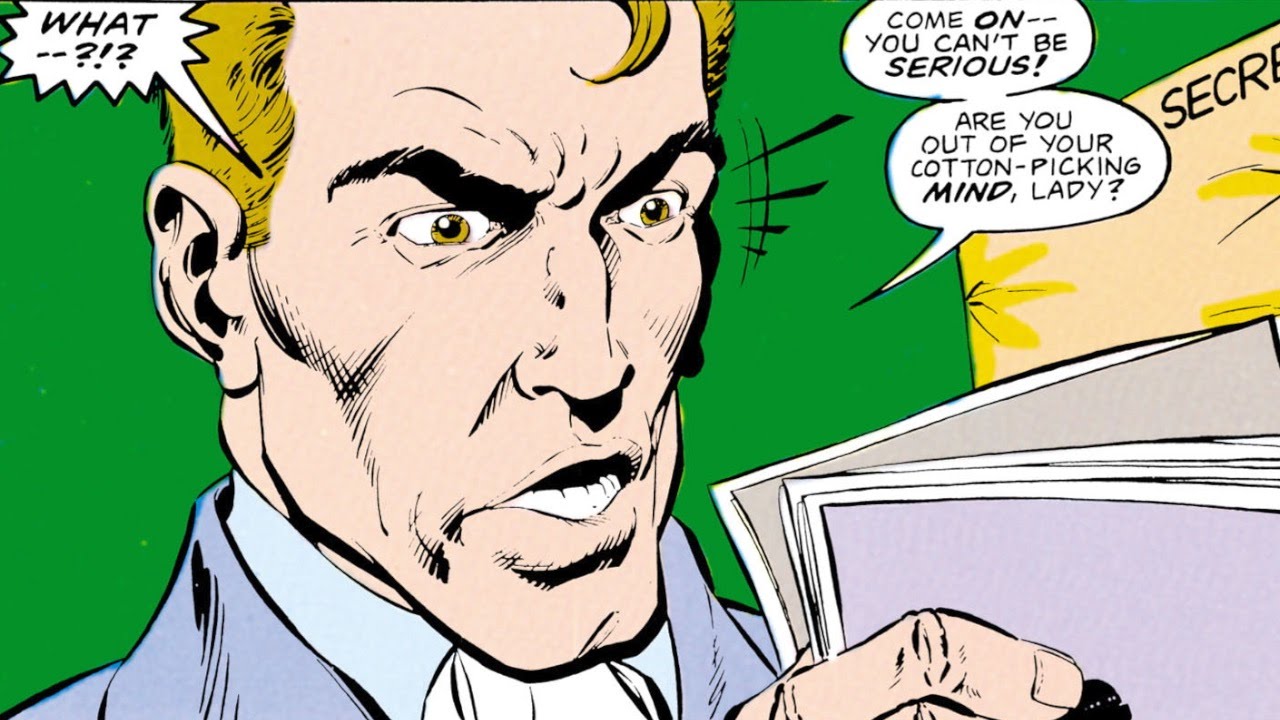 All-in-all, I give Legends…

Thanks for reading! What are your thoughts on Legends? Have any DC Universe reading suggestions you want to share or any comic book topics you want to learn about? If so, let me know in the comments below!

One thought on “LEGENDS | ‘New to Comics’ Breakdown”