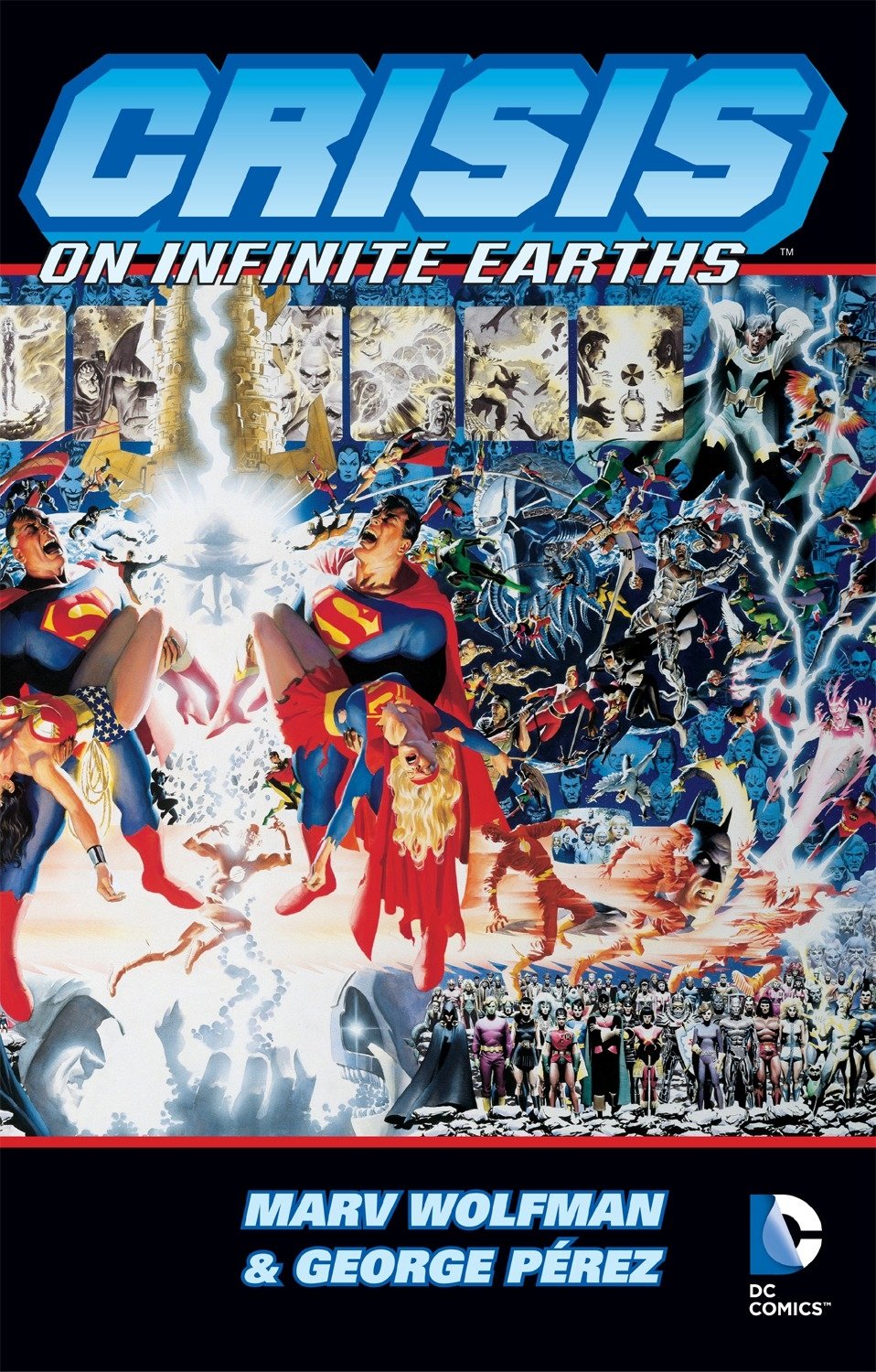 New to Comics is a segment where I look at various comic books; explaining, breaking them down and reviewing them down for readers unfamiliar to the medium.

This post was originally published when New to Comics was its own separate entity. But with all the recent DC posts, I figured it was about time to update it and put it back out there alongside my new post on its sequel, Infinite Crisis. So today, we’re talking about the story recently adapted into the epic TV-crossover, the milestone DC event – Crisis on Infinite Earths!

By 1985, the year Crisis on Infinite Earths started coming out, DC had come to realise that their multiverse had become too convoluted. And, as some of the heroes seen on their pages had now been operating for nearly fifty years, there were also many flaws in the continuity, which writer Marv Wolfman thought would be unfriendly to new readers. With this twelve-issue series, he hoped to realign DC’s multiverse into one, single, simple universe.

To this end, Wolfman needed to conceive a threat that would be powerful enough to wipe the many alternative Earth’s from existence, while also designing a story that would allow for several of DC’s alternate Earth’s to be merged together with ‘Earth 1‘, the home of ‘Silver Age’ DC characters like Superman, Batman, Wonder Woman and the Justice League.

This was the second attempt to tidy up DC’s failing continuity, the first being The Flash of Two Worlds, wherein the ‘Golden Age’ Flash met the ‘Silver Age’ Flash, and it was suggested that the two came from separate, yet similar, realities.

Alongside Earth-1, the Earths whose characters had been chosen for survival consisted of Earth 2; the home of DC’s original heroes from the forties, such as the elder Green Lantern and the Flash (the ‘Golden Age’ DC heroes); Earth-4, home of the heroes purchased from Charlton Comics such as Blue Beetle and the Question (who in turn, served as inspiration for the characters in Watchmen); Earth-X, a world where World War II never ended, and where heroes like Uncle Sam (purchased from Quality Comics) lived; and finally Earth-S, the magical world from which Captain Marvel / Shazam! and the Marvel Family hailed (purchased from Fawcett Comics).

In the same way that Crisis followed on from Flash of Two Worlds, there would later be several other crossovers to tidy things up further, and Crisis on Infinite Earths would form the first part of the ‘Crisis Trilogy’, rounded out by Infinite Crisis and Final Crisis. There was also a smaller crisis, Zero Hour, in the nineties, and the Flashpoint storyline, which served the same function as the Crisis stories that had come before it, in 2011.

At the time of writing [editing, 2020], DC is currently in the process of sorting out their continuity once more, as they tie up loose ends from the Rebirth revamp that started in 2016, and have their output line up with the end of the recent Doomsday Clock limited series, in which the DC Heroes confront Doctor Manhattan of the Watchmen.

Born on the planet Krypton, Kara Zor-El was sent to the planet Earth by her father Zor-El, to watch over her baby cousin Kal-El in the wake of Krypton’s destruction. However, her rocket was forced to detour, and subsequently, when she too crashed on Earth, Kal had already grown up and been embraced by the humans as the adult superhero Superman. In order to integrate into Earth society, Kara was adopted by Jeremiah and Eliza Danvers and began attending high school to learn about Earthlings, while also taking on a job at the Department of Extranormal Operations, helping them track and monitor superhumans and fellow aliens. With help from the D.E.O., Kara followed in the footsteps of her cousin Kal, choosing to fight for ‘Truth, Justice and the American Way’ alongside fellow heroes such as Batgirl and the Justice League as Supergirl, the Last Daughter of Krypton.

When the multiverse itself is put in danger, the enigmatic cosmic being known as The Monitor assembles a team of heroes and villains from different Earths to stop the destruction of all reality!

But as more and more parties join the fray, the Monitor’s plans are put in danger, and the heroes of several worlds must band together to stop the Monitor’s anti-matter antithesis, The Anti-Monitor.

Meanwhile, amidst the chaos that threatens a series of alternate worlds, Lex Luthor and Brainiac assemble the largest army of super-villains ours or any world has ever seen, with only one goal in mind: conquest.

Heroes rise and fall in this quest to save all reality itself!

Crisis received pretty good reviews when it came out. But times have changed, as have the expectations of comic-book fans, myself included. As such, when I read this comic for the first time, I vaguely recall finding it somewhat interesting, but trying to get through it now, I’m overwhelmed by how difficult that is. It’s quite boring.

Furthermore, this comic is not accessible in the slightest. Crisis on Infinite Earth is both a celebration of DC comics’ then-50-year history, as well as an attempt to simplify it. As such, it features hundreds of characters, weird cosmic goings-on, super-hero origins, super-hero deaths and team-ups, and at no point does it slow down to hold your hand.

There’s also a lot of expository dialogue that may as well be gibberish to the uninitiated, and weird trippy visuals and concepts that hearken back to earlier years of DC comic stories.

Of course, the stories that spun out of this were meant to be more reader-friendly, but this is like jumping into the final episode of season five of a TV show, knowing that season six was meant to be a revamp of sorts. You’d just wait till season six or start from season one.

While I concede that this is a landmark piece of comic-book storytelling, and some of the issues I have with it are more problems with modern-day audiences than it is with the comic-book itself, this thing could still be a heck of a lot shorter. It takes so long to get to the point.

And I’m all for a long story if it’s told well, but when trudging through this I just couldn’t bring myself to be invested. There are some powerful moments that make this comic stand out, but you have to dredge through so much nonsense to get to it. It’s filled with so many characters that no one could possibly care about all of them, and the spotlight is so spread out amongst these various characters that very few of them get many meaningful moments or substantial development, except for the ones that then die, or the ones who have been introduced in or just before this story – characters who you can’t really grow to love because the focus is very much on the fact that there is a multiversal crisis going on.

I’m not saying I hate this comic. It has its moments, such as the parts where they link into Green Lantern lore to talk about the creation of the universe, the nature of the Anti-Matter universe, things like that.

But the structure does not hold up by modern-day standards. Six or so issues are spent just setting the scene (that’s out of twelve, in case you’ve forgotten), the next three just linger in a bizarre little central act that’s not all that interesting and involves some of the heroes still trying to decide whether they want to do something (3/4s of the way through – far too late), which means out of twelve issues, only about three or four are actually dedicated to the actual purpose of the comic-book.

I’m not blaming writer Marv Wolfman for this. Considering the goal of this comic, to celebrate the many heroes of DC, cull some of their numbers, and reset the universe, this is probably about as good as it could have been. Unfortunately, by today’s standards (where the majority of the audience won’t remember what things were like pre-Crisis) it doesn’t make for an all that enjoyable read.

Massively important to DC, and a must-read at some point if you’re really into your DC lore.

5 thoughts on “CRISIS ON INFINITE EARTHS | ‘New to Comics’ Breakdown”