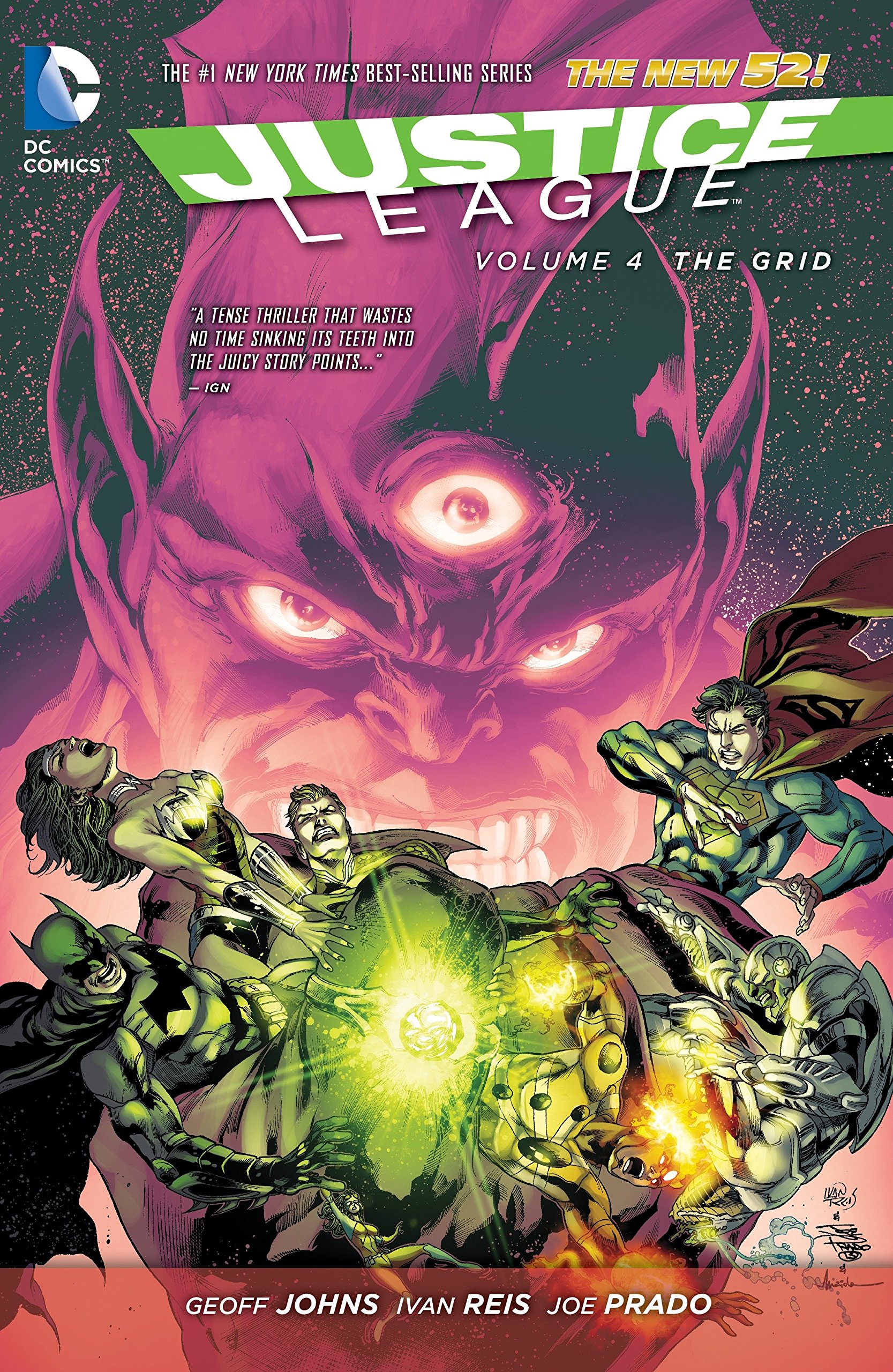 The trade paperback of Justice League: The Grid actually collects issues #18-20 and #22-23. Issue #21 makes up the final part of DC’s new Shazam origin that ran as a back-up story in the pages of the Justice League comic at the time, and so is subsequently published as part of the Shazam!: Origins graphic novel.

Since issues #22 and #23 are part of the Trinity War storyline, which is a crossover between the main Justice League, the government-controlled team in Justice League of America and the magical heroes of Justice League Dark, this novel’s focus is split in half, and the second half is split in half further because the other necessary bits of the story are reprinted in of America and Dark‘s respective collected editions, or the Trinity War collection that we’ll focus on next time. 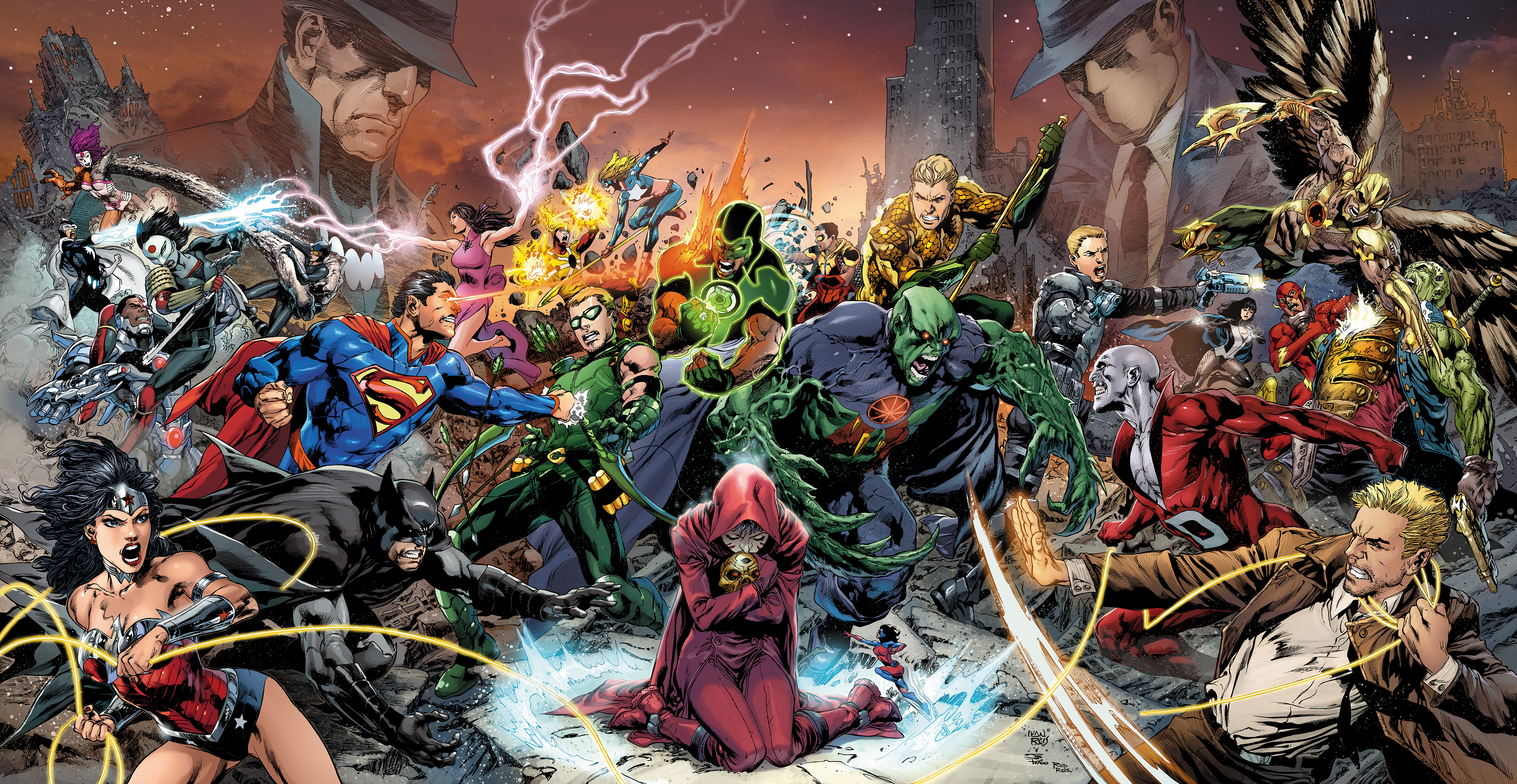 I reckon it would probably make more sense if it was – it’s only a few extra issues, after all – but I’m not a publisher. I’m sure they have their own logic behind it.

A million years ago, the planet of Mars was home to an incredible race of beings. These Martians were blessed with immense powers of telepathy, shape-shifting, invisibility, flight and increased physical attributes and senses. However, after being hit by a powerful psychic warning of their planet’s destruction and misconstruing it as an attack, the Martians were unable to avert a great tragedy that wiped out their kind. Despite the destruction of his race, a law enforcement officer named J’onn J’onzz managed to escape Mars’ fate. With his home planet now a barren wasteland, J’onn migrated to Earth, where he would spend his time hidden amongst humanity as police officer John Jones. Burdened with a search for justice and belonging, Jones became a superhero, hoping to protect his new home planet as the Martian Manhunter. Despite getting off to a rocky start, J’onzz eventually found a home as a member of the Justice League and is now valued as one of their strongest members; his powers perhaps in excess of even Superman’s.

After some Kryptonite is stolen from the Batcave, Batman becomes wary of Superman and Wonder Woman’s blossoming relationship, and how the two most powerful people on the planet hooking up may attract the League more enemies.

Meanwhile, potential new Justice League recruits Firestorm, Element Woman and the Atom are thrown in at the deep end after a visit to the Justice League’s satellite is interrupted by the return of the League’s space-faring foe – the alien tyrant Despero.

With tensions running high, Batman and Cyborg race to steal back control of the situation as ‘the Trinity War’ looms…

While not as strong as Throne of Atlantis, The Grid is a good follow-up comic. The story is concise and to the point, balances it’s various plotlines well and feels like a natural progression of events and characterisations from the previous arc.

The first issue provides a fun bit of insight into the world of DC, exposing readers to a wealth of characters outside your big names like Batman, Superman and Wonder Woman, even if it is extremely brief. The character interactions and the clear history behind each conversation imply more time spent together than the previous arcs, as the comic finally starts to feel like it’s about a group of heroes who have known each other for some time.

The art continues to be bold, colourful and vibrant. Full of life, it paints a very different picture of DC than films like Man of Steel and Batman v Superman‘s bleak colour palette.

Jesús Saíz (art above), in particular, is a welcome addition to the art team for the book, as while his style does feel a bit more stylized than the bolder, more conventional art of Lee and Reis, it fits in nicely with the aesthetic they’ve developed over previous stories. His characters just feel so alive and entertaining.

Furthermore, because of it’s contained and to the point nature, the ‘new recruits’ side of the story, in particular, is just fun. It makes you want to see more of these potential Justice Leaguers, while also seeding potentially interesting events down the line.

There are a few points where the story ties in quite closely to other ongoing stories of the time, like a mention of Robin’s death in the Batman comics, or the building up of a parallel League in Justice League of America, but overall, not knowing the details doesn’t really detract from the story being told in these pages.

That may change when Trinity War though.