New to Comics is a segment where I look at various comic books, explaining their background, reviewing them, and breaking them down for readers unfamiliar to the medium. The title is a reference to a former university project that I carried on as its own site for several years before laying it to rest.

As part of the countdown to Endgame, alongside reading the main series of Hickman’s Avengers, I’ve also decided to dive into the companion series New Avengers for that much-needed context (you’ll see what I mean). 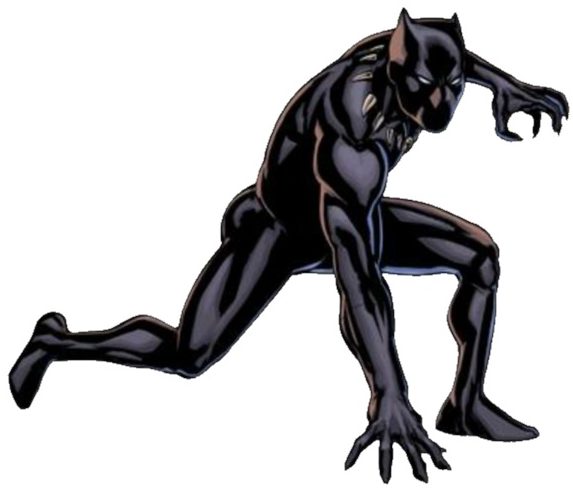 Hidden away in Africa lies the isolationist nation of Wakanda. Kissed by a meteor filled with Vibranium, Wakanda became the only source for the valuable, durable metal, and used this gift to become one of the most technologically advanced nations on Earth. At their head sits their King, the Black Panther, and after the murder of the reigning King T’Chaka by the outsider Ulysses Klaw, that mantle was passed down to his son and heir, T’Challa. Having consumed the heart-shaped herb, T’Challa is forever linked to the Panther Goddess Bast who grants him a superhuman physique. Now, as the Black Panther, T’Challa is usually prepared for any threat. His resources vast and his Kingdom nigh-impenetrable, T’Challa has always harboured a strong distrust for those from the outside world, but after a chance encounter with the Fantastic Four, the Black Panther has made efforts to open both himself and his nation up to the world, revealing their hidden glory and becoming one of the most popular superheroes on the planet.

Although the main Avengers title is a big get for any writer at Marvel, it’s clear that Jonathan Hickman’s true passion wasn’t for writing Captain America, Thor, the Hulk and the other Avengers, so much as it was dealing with the morally ambiguous choices of their secret counterparts, the Illuminati.

First created by Brian Michael Bendis, the Illuminati originally consisted of Iron Man of the Avengers, Mister Fantastic of the Fantastic Four, Black Bolt of the Inhumans, Namor of Atlantis, Professor X of the X-Men and Doctor Strange of the mystical realms. The group were retconned to have been in existence for many years, operating behind the scenes of many major events, and at one time even collected the Infinity Gems, dividing them among their members for safe keeping. They were eventually outed after the Hulk, having spent several years on a gladiator planet (similar to Thor: Ragnarok) returns to Earth and blames them for sending him away and accidentally wiping out the populace of the planet he had grown to love (it was later revealed to not be their fault).

They returned a few times after that, with Medusa replacing Black Bolt and Captain America also joining the group, but for the most part, their publication history has just been in little cameos and one-shots. New Avengers is their first ongoing series where they function as a team.

For years, a secret Illuminati of superheroes has been manipulating the world in secret. At their formation, the Black Panther warned them that only bad things would come of their union, but they persisted nonetheless. But after witnessing a threat to the entire multiverse, the Panther is forced to put aside his beliefs and join their ranks. As a universal catastrophe has forced the multiverse to start collapsing, universes crash together in these ‘incursions’ at focal points on Earth, and the only way to save their world is to destroy another – a task that, if undertaken, will ensure that none of these men will remain the righteous heroes they once thought themselves to be.

Surprisingly, yes. Moreso than the main Avengers title, perhaps. The formation of the Illuminati themselves is shown in a quick one-page flashback and the fact they exist is pretty much all the context you need.

This first volume is pretty self-contained as far as things go, and creates its own mythology to play with that doesn’t require much outside knowledge beyond who the characters are, as well as understanding the cameos from villains like Doctor Doom and Galactus.

This title, thus far, is heaps and bounds better than the main Avengers series. While over there, they have flashy blockbuster action, due to the lack of character work it does at times feel like it’s lacking in substance. It’s more concerned with grand designs for the universe than it is the heroes who are facing the various catastrophes. New Avengers, however, manages to deliver the best of both.

Due to the exceptionally smaller cast, it’s easier for Hickman to delve into each hero’s character. Some are a bit neglected, like Doctor Strange, but others, like Iron Man, Mister Fantastic and especially Black Panther, really shine here. It also helps that, due to the nature of this grouping, the stories aren’t about punching supervillains so much as they are several smart and powerful men trying to save the universe from a threat that they can’t punch.

The collapse of universes, while not new in comics, is done in an interesting way here, and one that seemingly has no solution where the heroes can come out of it remaining heroes. The prospect of them having to destroy parallel Earths and kill the alternate Earth’s populace to save their own is pretty dark, and brings up some interesting questions about what it means to be a hero – and the range of places these heroes come from – The Avengers (a team), the Fantastic Four (a family) and Wakanda (a kingdom) – mean that their outlooks are all different and understandable, and bring interesting new sides to the debate.

What’s even better is that the primary conflict, for this arc, at least, is not between them and an opposing party, so much as it is with each other. Obviously, Captain America is not down for the wanton destruction of worlds, whereas, conversely, Namor being an anti-hero at the best of times, is all too willing to kill to save his own skin.

It’s a shame that the main Avengers title seems to be the unwanted child in favour of Hickman giving all his love to New Avengers, but if it means getting such a great story here, as opposed to two passable ones, I’m all for it.

Plus, thank god, finally a comic with artistic consistency! Steve Epting is the primary artist on this comic (as in, he does all the drawings, there are other inkers and colourists involved, obviously), and the uniform nature of the visuals really helps. His realistic style brings a dark and grim aesthetic that matches the content the heroes are talking about, and yet it still manages to make the awe-inspiring sights seem awesome due to some subtle design and colour choices.

This is an excellent comic, and if you’re tired of superheroes punching one another (although that does happen a bit here) and want to see them face a threat that’s more testing on mind and character than it is physically, this is the place for you.

2 thoughts on “NEW AVENGERS: EVERYTHING DIES | ‘New to Comics’ Review”