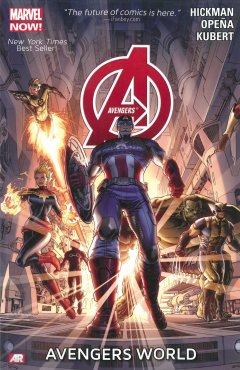 New to Comics is a segment where I look at various comic books, explaining their background, reviewing them, and breaking them down for readers unfamiliar to the medium. The title is a reference to a former university project that I carried on as its own site for several years before laying it to rest.

Today, the countdown to Avengers: Endgame continues, and with the core roster of Avengers covered – I’ve decided to read through Jonathan Hickman’s epic Avengers run that has, no doubt in part, inspired the two blockbuster movies Infinity War and Endgame, starting with volume one: Avengers World. 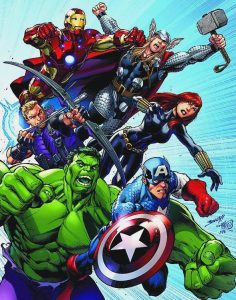 In a ploy to defeat his brother, the trickster God Loki hoped to pit Thor against the rampaging behemoth known as the Hulk. However, the two heroes, assisted by Iron Man, Ant-Man and the Wasp, instead banded together to defeat Loki and in doing so, formed the Avengers. Funded by the billionaire alter-ego of Iron Man, Tony Stark, and based out of his New York City mansion, the Avengers are ‘Earth’s Mightiest Heroes’ and the world’s premiere super-team. With close ties to the likes of S.H.I.E.L.D., the Fantastic Four, and the majority of the Earth’s heroes, the Avengers have time and again stood up to threats that are terrestrial (such as Ultron), extraterrestrial (such as Thanos), and even foes from out of time (Kang the Conqueror). Their unity was cemented after the recovery of the long lost World War II super-soldier Captain America, but the Captain would be only the first in a long line of superheroes to join the team, with their roster ever-growing and always prepared to defend the Earth when the call is put out – “Avengers, Assemble!”

From 2004 to 2012, the Avengers franchise was near exclusively penned by Brian Michael Bendis. He shook things up straight away by destroying the Avengers in his opening story, Avengers Disassembled, and went on to reform the Avengers with more popular characters like Spider-Man and Wolverine among its roster.

His colossal run had some high points, but also several low ones, and so when it was announced he was moving over to the X-Men franchise, Avengers fans could breathe a sigh of relief, while also commiserating for fans of the X-Men.

The thing with Bendis was that he is a master of the street-level hero. He excels at writing your Spider-Men, Daredevils and Luke Cages, but when it comes to Earth-shattering events, his writing often leaves audiences wanting.

Taking the reigns after Bendis was Jonathan Hickman, who had recently finished his mind-bending run on Fantastic Four, in which he explored time travel, multiversal problems and the question of how one solves ‘Everything’.

It wasn’t for everyone, but it was much more in line with the sorts of problems Earth’s Mightiest Heroes should be facing, rather than some guy with two guns in a hood (uncreatively named ‘The Hood’, although that wasn’t Bendis’ fault). From the very first issue, Hickman’s run on the Avengers promised intergalactic wars and a ruinous future for our heroes, and his extended run would bring together everything he had worked on across both his Avengers and Fantastic Four runs. 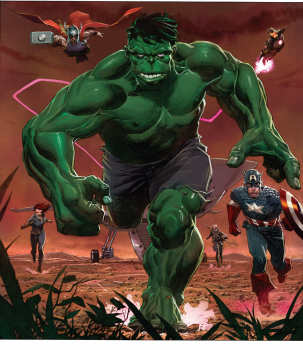 As the world continues to grow more and more dangerous, Steve Rogers and Tony Stark bring together a small army of superheroes as the new Avengers after the core team – Captain America, Iron Man, Thor, Hulk, Black Widow and Hawkeye – find themselves promptly defeated by a devastating new threat operating on Mars.

This is a strange comic (and run, as a whole).

It’s a starting point for the Avengers, and the core team at the beginning of the story is obviously meant to appeal to fans of the Marvel Cinematic Universe, seeing as Captain America, Iron Man, Thor, Hulk, Black Widow and Hawkeye being THE Avengers wasn’t really a thing until the movie Avengers Assemble. They were all Avengers, sure, but that exact line-up had never actually happened prior to the movie’s production, to the best of my knowledge. Plus, the lesser-known characters who make up the new Avengers, for the most part, have their backstories explained in various issues following the opening story, so sticking with the run rewards you by giving you the complete picture.

This is especially important because several of these Avengers, like Hyperion, Captain Universe (there’s a Captain of everything when it comes to Marvel Comics), Smasher and Nightmask are variations on older heroes who Hickman has recreated especially for his run. There is something that makes this not so accessible though, and that falls under our verdict for this comic… 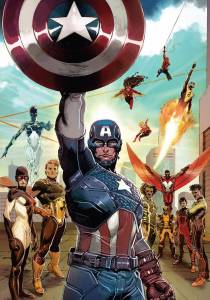 The writing on this run is, at times, impenetrable.

With such a large cast of heroes, it’s rarely focused on telling stories about the characters front and centre so much as it is about telling high-stakes stories about creation, destruction and the fate of the universe. It’s filled with hyper-intellectual dialogue that generally doesn’t mean all that much if you’re not a genius (which I decidedly am not).

You can understand it, sure, but it’s like dropping someone into Doctor Who for the first time and watching them trying to decipher all of the science-fiction jargon (“reverse the polarity of the neutron flow!”).

Still, it’s easy to appreciate the scope of what’s happening, and from the very first few pages, you can tell you’re in for a heck of a ride. The first three issues cover the aforementioned problem on Mars, and they’re a pretty fun read. You get to see the Avengers face off against a threat ‘no single superhero could withstand’, and while there is a bit of deus ex machina involved in its ending, it’s depicted excellently by Jerome Opeña, who really hammers down that vast sense of scale and brings a dynamism to the pages.

He does seem to have a problem drawing Captain Marvel though. She looks hell’a freaky.

The next three issues see the Avengers, split into smaller teams, dealing with the fallout of the opening arc, while also seeding in backgrounds for those lesser-known characters. Again, you can feel a grand sense of scale coming together, but unfortunately, it’s not as well depicted. I like the Adam Kubert; I think he’s great – but I think he’s like Bendis – he has strengths (like Spider-Man) and he has weaknesses (like showing Captain America, Wolverine and co. fighting an alien armada on another planet). Some things just don’t click.

However, the main problem with this is that lack of character work. There are small, fun beats, but overall there are just too many characters for an in-depth study. Hickman covers this well in his companion book, New Avengers, which focuses on a much smaller cast of characters – but it’s clear that’s just not the kind of story he wants to tell here. So when you see Spider-Man being a jerk to his teammates, unless you know that this comic takes place alongside Superior Spider-Man, wherein Spider-Man’s body has been possessed by Doctor Octopus, it just seems out of place due to the lack of context. 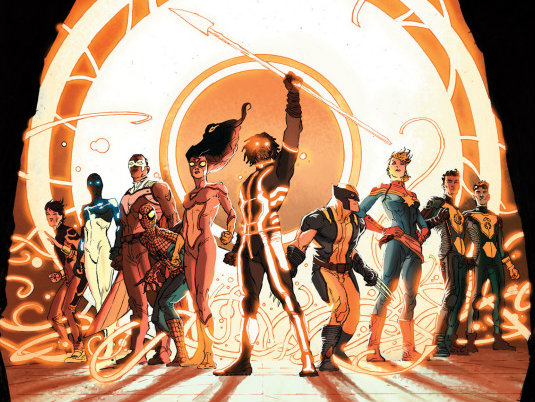 Still, it’s a welcome change from Bendis’ Avengers, and this is just the opening arc. There are better things to come.

NEXT CHAPTER: The Last White Event