– This post was originally published on my now-defunct site, New to Comics. – 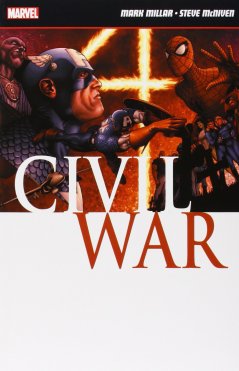 New to Comics is a segment where I look at various comic-books, explaining their background, reviewing them, and breaking them down for readers unfamiliar to the medium. The title is a reference to a former university project that I carried on as its own site for several years before laying it to rest.

Mark Millar was a pretty hot commodity at Marvel during the 2000s, so this week, we’re returning to look at some more of his work. You’ll know the basic story from the hit 2016 film. It’s Avenger vs. Avenger. Friend vs. Friend. Captain America vs. Iron Man. It’s Marvel’s Civil War.

As it became obvious America was destined to join the war that had consumed the world in the late 1930s, Steve Rogers became determined to do his part for the war effort. Continuously rejected due to his sickly stature, Steve was eventually found by Dr Abraham Erskine, and enlisted into the army under ‘Project: Rebirth’. Injected with a serum of Erskine’s own design, Steve was transformed into a super-soldier; his body and mind enhanced to the peak of human potential. But tragedy struck, as Erskine was assassinated, leaving Steve the first and only in the proposed wave of super-soldiers. Fighting on the front lines as Captain America alongside his sidekick Bucky Barnes, Steve was eventually lost at sea, and frozen for several decades.
Eventually awakening in the modern era, Captain America returned to the spotlight as a symbol of hope and American power; his new mission – to protect both America and the world, from any and all threats as the leader of the Mighty Avengers!

Although I had bought and read comic-books before this, thinking back, I believe Civil War would have been one of the main stories that got me into comic collecting. I’d had an on-and-off subscription to the UK’s reprinting of the various Spider-Man comics, but at the age of thirteen, I went into a Waterstones in Llandudno and picked up this very comic. Eleven years later, it’s pretty battered, but it still holds up. And from there, I went on to pick up all the major Marvel event books, due to the fact I was desperate to see what was going on and the US’ Marvel Comics line was about a year and a half ahead of the reprints in the UK.

What grabbed me about this comic was its scope. It doesn’t feature much in the way of world-shattering stakes, and yet it changed Marvel Comics, their characters and the types of stories they were in for the next decade, as although the events of the story would eventually be resolved (in Siege, in 2010), the legacy of grand hero vs. hero-centric crossovers can still be felt today, with 2015’s Secret War continuing the rivalry between Captain America and Iron Man, Civil War II having been released in 2016 and last years Secret Empire also containing some similar themes.

The story sees a group of fame-seeking super-powered youths known as the New Warriors seeking out higher ratings for their reality TV show. When their attempt to film an episode of them apprehending some hardened super-criminals goes awry, the New Warriors are killed in an explosion, and a chunk of Stanford, Connecticut, is decimated – taking the lives of a whole school of children.

In response, the government puts forth the Superhuman Registration Act, which dictates that any powered individuals must register their true identities with the government, so that they can continue their superhero activities having undergone proper training, with the option of working under the employ of S.H.I.E.L.D.

Feeling responsible for the calamity, Iron Man, Mr Fantastic and Hank Pym spearhead a pro-registration campaign. However, Captain America refuses to hunt down people who put their lives on the line for their fellow Americans, going rogue, and forming the ‘Secret Avengers’ in resistance to the act. As Cap and Iron Man try to gain more members to their respective sides, the conflict continues to heat up, erupting into a full-blown superhuman Civil War.

As you can see above, Civil War contains a pretty sizeable roster of characters that really blows Captain America: Civil War‘s set of heroes out of the water. At one point, a hero even remarks that there must be about one hundred super-powered individuals present in one of the final conflicts. As such, new comic-book readers will probably be unfamiliar with the various characters present.

However, speaking from experience, seeing the various colourful and dynamic costumes, each with their own unique powers, flying and blasting across the pages may well fill you with intrigue, as it did me many years ago, and lead you to want to find out more. Another bonus is that if you’re a keen Marvel movies/TV fan, you will probably be able to figure out who is who from the various adaptations that have occurred over the past decade or so.

Plus, for the most part, it’s only characters like Iron Man, Captain America, Spider-Man, the Fantastic Four, Hercules, Luke Cage and the Punisher who have sizeable chunks of dialogue, so a passing knowledge of Marvel Comics will mean you’re in the know when it comes to the main characters, at least.

Last time we talked Mark Millar, I pointed out how a lot of the time, his dialogue makes characters seem unlikable. Here, thankfully, you can see tinges of Millar-ness, but not quite to the same extent, so everyone sounds a lot better.

An argument could be made that a lot of characters act out-of-character, but in story, you could write that off as it being a stressful time of monumental change for our heroes, and as such, some of them are prone to acting rather irrationally.

Viewing the comic through that lens, this is a very laid-back read. The art is powerful and dynamic, and the story flows excellently. You could happily get through this in one sitting. Furthermore, you’d get a lot of entertainment for your money, as this comic is filled with huge and shocking twists, each of which helps to shake up the Marvel Comics landscape in some way. Friendships end, heroes are killed, villains become the ‘good guys’, this comic’s got a lot going on – and although it’s not for everyone, I think it’s telling that out of all of Marvel’s events, this is the one that had the longest-lasting impact. And it makes sense because it’s such a genius idea when it comes to superhero comics books. In the real world, the answer would be obvious – Superheroes should be registered – but in the comic-books, other factors mean the answer isn’t so clear cut, which makes it a very interesting debate.

On top of that, the ending does well to set up oncoming stories, which are all framed perfectly within the narrative. Other crossovers have often tried and failed to do the same thing, but the key here is subtlety. This comic – not just at the end, but throughout – makes great allusions to other ongoing stories, but not in a way that you feel that you have to have read them to understand what’s going on, so much as if you have read the tie-in material, you’re experience will be heightened when it comes to this comic book.

As I mentioned before, this comic-book isn’t 100% new-reader friendly, but if you’re looking for somewhere to jump in at the deep end, this would be it.