I’m kind of glad I didn’t actually re-watch Deadpool before going to see this film (I had written that review a few years back, and after a few edits it seemed like a timely point to restore it), like I did the various Marvel movies before Infinity War and the Star Wars saga before The Last Jedi, because I feel it would probably have lessened the experience.

Let me just level with you before we get into this properly; working at a cinema, I dreaded the release of Deadpool 2 because it would no doubt encourage a bunch of underage kids to try and sneak in – a bunch of underage kids who, being underage, don’t have I.D., which, let me tell you, is really ruddy annoying. And when people feel entitled to see a film (of all things, seriously!) which they can’t due to age restrictions, it can bring forth the ways in which certain members of humanity are either extremely annoying, or in short, dirtbags. This may or may not have had an affect on my experience, as I feel I didn’t quite enjoy the film as much as fellow audience members. But I digress.

Deadpool 2 sees the return of, you guessed it, Deadpool, who has broadened his scope and become somewhat of an international hero. But after certain circumstances lead him into a complicated relationship with a young mutant called Firefist, Deadpool realises he can’t save the world alone, and decides to form a ‘super-duper-fucking-group’ (that line doesn’t make it to the actual movie, unfortunately) to protect Firefist from the time-travelling killer known as Cable.

With Deadpool being a funny, action-packed film, it’s natural that in the sequel they would want to double down on said success, bringing more action, more humour and in a lot of scenes, more emotion. However, in watching this, a lot of the time, I felt… well, very little to be honest.

There are so many jokes, the majority of which won’t land either because they’re based on such a wide variety of references or, because, in short, they’re not all that amusing. The best gags are perhaps the visual ones – the inane ramblings of the ‘merc with a mouth’ less so. I’m not saying this isn’t a funny movie; there are several laugh-out-loud moments. But I’d estimate those moments came from around 3/10 of the jokes.

The emotional core of the film fares better, and although sometimes it’s a little derivative of pretty much every other movie it references, there are some strong moments, and it’s nice to see the character of Deadpool fleshed out a little more than he was in the previous film. Similarly, the characters of Cable and Domino in particular are a joy to watch, particularly in the latter’s case, due to her basic character and use of her powers. A lot of the time though, where these characters are going and where the film takes you often feels a tad predictable.

Although again, full disclosure, I did see snippets of this film out of context at work, but I still reckon I could tell where certain scenes were going without those snippets. 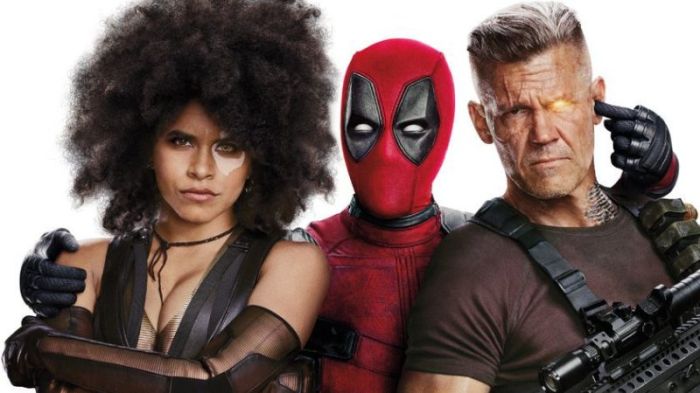 The action, as you might expect from one of the directors of John Wick, is pretty good. Perhaps the best part of the movie in fact. It’s slick, it’s interesting, and, unlike most superhero films, pretty gory, which is a nice deviation considering how basic and formulaic some of the other facets of the film can be.

I don’t know, I feel like I didn’t latch on to this as hard as everyone else seems to have. But while there are some funny moments and slick action, there’s also a fair chunk of it that seems (to me) quite dry, predictable, poorly CGI’d and some of it doesn’t even make sense. But that could lead us into spoiler and nit-pick territory, so I’m just going to cap it off there.