As I mentioned in my review of the original Star Wars, my favourite of the bunch often changes depending on a number of factors. Usually, however, it’s Return of the Jedi. Despite that, having watched the majority of the films in close proximity to one another, and in my attempt to be unbiased, there are numerous flaws I’d like to discuss about my ‘favourite’ Star Wars movie. 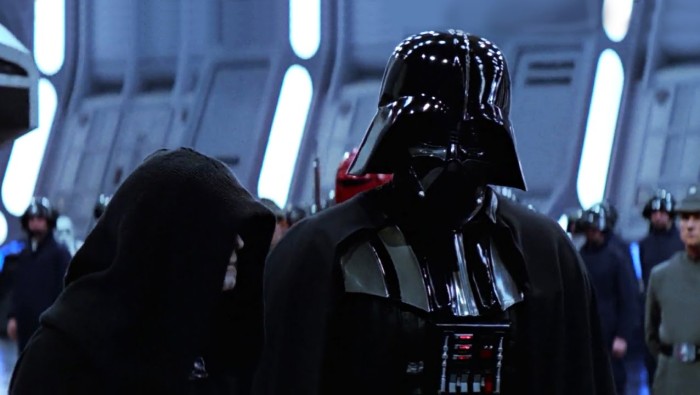 The film picks up shortly after the events of Empire, with Luke, Leia, Lando, Chewie, R2 and C-3PO infiltrating Jabba’s palace so they can stage a daring rescue attempt and save their friend Han Solo. With the gang reunited, Luke must finish his Jedi training, and the Rebel Alliance must unite one final time to destroy Darth Vader and the Emperor, who have gathered aboard a new, second Death Star.

The issue I’d like to start with is the fact that the first half of this film feels as though it has a lot less heart than the first two.

This is in part because of a number of design, script and production changes, but even in the final product, it shows. It’s a well known fact that Harrison Ford wanted rid of Star Wars after Empire, and yet, attempts are made to bring his character back, in what feels like a segment of the film that, while fun, feels like it’s been stuffed in with the sole purpose of resetting the slate, with little regard for how it fits into the overall plot. It feels disconnected. And that disconnect stretches throughout the film, spreading into the scripting, directing and even some of the acting choices.

The treatment of Boba Fett is an obvious example. You can accept him having little in the way of character in Empire because he’s clearly being set up for Jedi. But between those two films, it was decided that instead of having several more films following Empire, there would just be one more to round out the trilogy. And subsequently, Boba Fett makes a quick and unsatisfying exit from the franchise.

Another problem (sort of) is the kid-focused angle. George Lucas has always stressed that Star Wars, at the end of the day, is a children’s movie. And I’m fine with that. Kid’s films can be for all the family. But after a strong start with Star Wars, and a dark and thoughtful follow-up in Empire, Jedi feels like it’s taking a U-turn into ‘kid’ territory, and in doing so is more childish than either of the other films. The most obvious facet of this is the inclusion of the Ewoks, instead of the original plan of the film heading to Chewbacca’s Wookiee home-world.

As I said, I often view it as my favourite, so obviously there are things about it I do like a lot (which I’ll get into momentarily). I just feel it was important to talk through all the issues, as Jedi is considered by many to be the worst of the trilogy. However, those above facts, generally, don’t diminish my appreciation of the film. They just highlight that it (or, at least, the first half) is not as well written, acted or directed as the other films in the Original Trilogy. Fortunately, I can say it’s still a heck of a lot better than any of the Prequels, even if I do enjoy those films.

Anyway, on to the good stuff!

The best part of this film is the third act, and anything featuring Vader and the Emperor. The latter villain is set up wonderfully, seeded in A New Hope, Empire Strikes Back and tantalisingly teased as even more evil than Vader at the start of this very film. His demeanour seems truly despicable and he’s someone you just love to hate. The final confrontation that Palpatine draws Luke and Vader into truly feels like a culmination of all the battles that have come before it. The way it mixes the progression of Luke’s fighting style with the tempting power of the dark side is perfect, and seeing Luke overcome that temptation truly feels like a strong conclusion to his Jedi journey.

Similarly, Leia’s progression in this film is arguably stronger than in other films. Although her journey does get off to a rocky start with her once again playing the captive princess, with the addition of the iconic golden bikini, she quickly overcomes that trope by killing her captor with her own chains before moving on to become the Rebel leader that she was always meant to be. I’m just going to ignore the whole sister revelation and her following line, because frankly, it doesn’t make any sense.

(NOTE: I realise I’ve become a bit liberal with spoilers and I apologise for that, but if you haven’t seen the Original Trilogy of Star Wars films by now, then you’re made a grave error in the way you’ve lived your life).

Another bonus is the large scale space battle that happens while Luke confronts Vader and the Emperor. While there have been space battles in Star Wars and Empire, this is probably the largest and most spectacular of the trilogy – it also spawned one of the most iconic lines in all of Star Wars (“It’s a trap!”).

My personal favourite thing about this film though can be seen as rather controversial as it comes from the Remastered Edition of the film. The end segment, wherein the ‘Nub nub’ song is replaced by John Williams’ ‘Victory Celebration’ and we are given glimpses of the various planets from across the six films celebrating the fall of the Empire feels like a truly emotional and fitting end to the story. The music, the editing and the shots of characters rejoicing and reuniting is the perfect end to the monumental saga George Lucas and his team built.

Which seems as good a place as any to end my review. All-in-all, I give it:

For being an exciting, if a bit silly, film that ends on the perfect note:

10 thoughts on “RETURN OF THE JEDI | DVD Review”